After the Bitfinex-Tether fiasco rocked the cryptocurrency market late last month, the trading volume of Bitcoin to the top stablecoin dipped slightly. However, given the larger picture, it held firm. In light of the collective market upheaval, BTC-USDT trading volume rose by over $1.2 million.

The same was pointed out by CryptoCompare’s exchange review for the month of April, which also detailed Bitcoin trading in fiat and stablecoins. Tether [USDT] topped the list, followed by the top fiat currency, the US Dollar [USD], with the three prominent fiat currencies of Japan, the European Union and South Korea making the top-5. 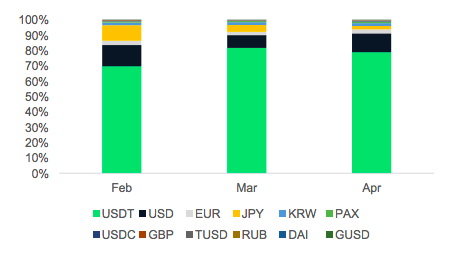 Bitcoin to USDT took 78.9 percent of the total volume of both fiat and stablecoins, amassing a total of 10.3 million. Despite the absolute value increasing by $1.4 million from March’s total of 8.9 million BTCs, the market share dropped by 2.8 percent. Tether held 81.7 percent of the market in the previous month.

However, when the months of January and February are put into context, the numbers paint a telling tale. Back in February, the USDT share was 70 percent of the market, with the volume at 6.23 million BTCs, albeit in a recovering market. In the first month of the year, Tether represented 65 percent of the market, with the December 2018 and November 2018 figures pegged at 63.7 percent and 54.9 percent, respectively. 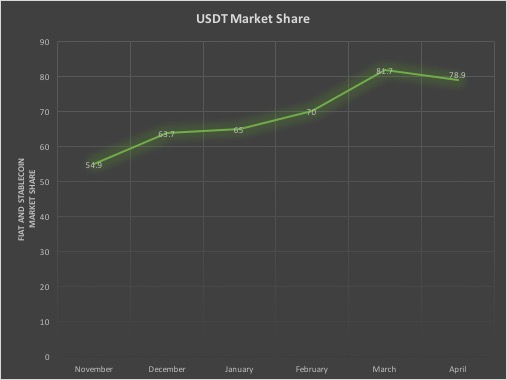 Given the past figures, Tether’s market share has been on a consistent rise since November 2018, when the peak of the crypto-winter materialized, peaking at 81.7 percent in March. The performance for the month of April was the first time in over 6 months that the market share of BTC to fiat or stablecoins dropped on a month-on-month basis.

It should be noted that the New York AG’s report which accused Bitfinex of covering up their undisclosed losses of $850 million using Tether reserves was released on April 25. Most of the BTC-USDT trading activity analyzed by the report had already transpired. Hence, the bad-rep faced by Tether in the community, something that may have had a spillover effect into May, is not reflected in the report.

Unsurprisingly, USDT held the top spot when BTC trading into top stablecoins is looked at, accounting for 97.9 percent of the market and dropping below 98 percent for the first time in two months. Other top stablecoins on the list are Paxos Standard [PAX], USD Coin [USDC], and TrueUSD [TUSD].