Bitcoin [BTC], the largest cryptocurrency in the space has often taken the center stage for being termed as a go-to coin for criminals and money launderers. The coin made headlines once again after a report by Whitestream claimed that Bitcoin donations to ISIS increased a day prior to the Sri Lanka bombing, which killed around 253 civilians.

This news, which was an exclusive by a news portal, en.globes, soon gained a lot of traction from several media houses such as Standard Digital, a Kenyan news portal, and The Daily Mirror, a Sri Lankan news portal.

The article by Globes started with the statement, 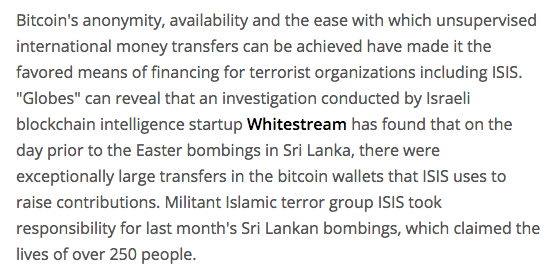 The report stated that the ‘blockchain intelligence company’ [Whitestream] noticed that there was an increase “of hundreds of percent on the bitcoin balance,” held by the Canadian crypto-platform, CoinPayments.

It further alleged that the militant group converted fiat to Bitcoin via the exchange and that the platform’s Bitcoin wallet holdings increased from $500,000 to $4.5 million [average daily monthly balance], a day before the Sri Lanka bomb attack. More so, it also stated that the balance dropped back to its original value on the day of the attack.

“Whitestream said, ‘In the past two years, ISIS has been running a mass funding campaign to raise donations in bitcoin. The aim of the campaign is to contribute to the organization’s technological division, which deals with the media, advertising and computer infrastructure sectors. The main efforts are carried out through a dedicated website. The domain address is frequently changed to prevent tracking by authorities around the world.”

Additionally, the ‘blockchain intelligence company’ claimed that CoinPayments “admitted that their wallet was involved, but denies that it is connected to ISIS”. It also stated that this was not the first time CoinPayments was involved in a case similar to this, adding that it was previously tied with Hamas, a Palestinian Sunni-Islamist fundamentalist organization;

“Terrorist organizations are in the habit of exploiting unregulated commercial platforms and work through them. Whitestream works with Israel’s Ministry of Defense’s National Council for Fighting Terror Financing is order to thwart and halt these money transfers.”

Further, on how the firm recognizes addresses connected to terrorist organizations, the report said, 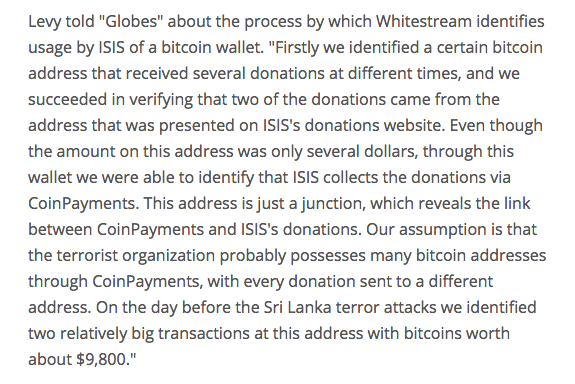 After coming across this news, the team at AMBCrypto did a little bit of research on Whitestream and found the following. First, the Whitestream link on Globes was a redirection to a page which was still under construction.

According to the company’s LinkedIn profile, the platform was founded in 2014, with around 2-10 employees and has only two employee connections presently. Additionally, after the news of Bitcoin’s connection to the Sri Lanka bombings was published, the company’s Twitter following grew from double digits to over 2000 in a matter of two days. 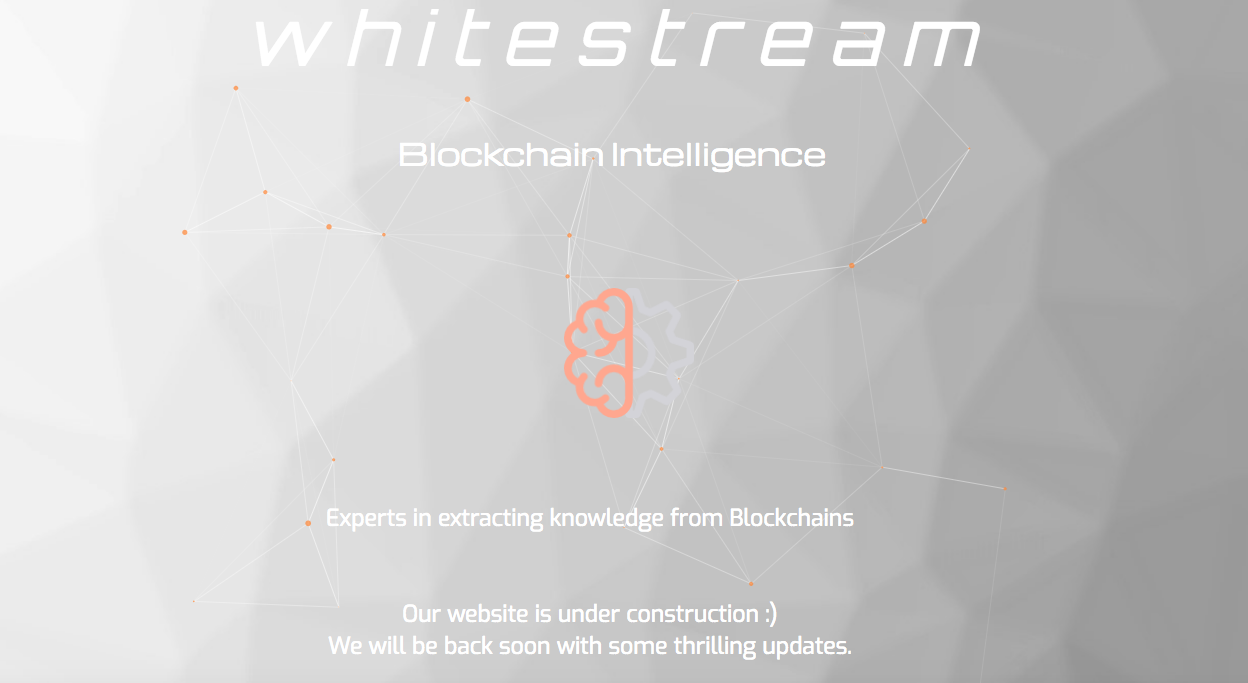 Secondly, as of now, the platform’s “research” pieces have only been published by Global, a Hebrew-language news portal, according to data present on their Facebook page. Third, there was no information pertaining to the addresses involved in these cases or any blockchain proof, that would usually be provided by a ‘blockchain intelligence company,’ or any research platform that backs data in the research.

Further, our team also reached out to CoinPayments to verify the authenticity of the report and whether they actually “admitted” that these transactions were involved. The platform outrightly shot down the claims made by Whitestream, stating that they did they not provide crypto-to-fiat service. They also denied to make any remarks on the matter. They said,

“We currently do not provide any virtual currency to fiat exchange services, never made such comments to Whitestream and are currently reviewing all possible legal remedies available to us. Based on our ongoing compliance reviews of current user accounts, our services have not been used by ISIS. Any statement or allegation to this effect is false and constitutes defamation and/or libel.”

“We have initiated legal action against whitestream as the information they published and provided is inaccurate and false. CoinPayments was not involved in providing the services whitestream mentioned. We did not get contacted by any other media outlet or anyone that re published the content.”

Since this domain is niche, it is imperative that we rely on authentic and reliable sources for any piece of news.

The post Bitcoin [BTC]/Sri Lanka bombing: Our services have NOT been used by ISIS, claims CoinPayments appeared first on AMBCrypto.