Bitcoin [BTC], the largest cryptocurrency by market cap, has been on a roller coaster that has been riding the high-wave. The coin that is making significant recovery from its 2018 lows has smashed through another important benchmark by trading above $8000 on top exchanges.

According to CoinMarketCap, at press time, the largest cryptocurrency was trading at an aggregated price of $7955 with a market cap of $140.795 billion. The trading volume of the cryptocurrency was noted to be $28 billion and has witnessed a rise of over 12 percentage in the past 24-hour. On Coinbase, the value of the currency was around $8030, while on Bitfinex it was recorded at $72926. 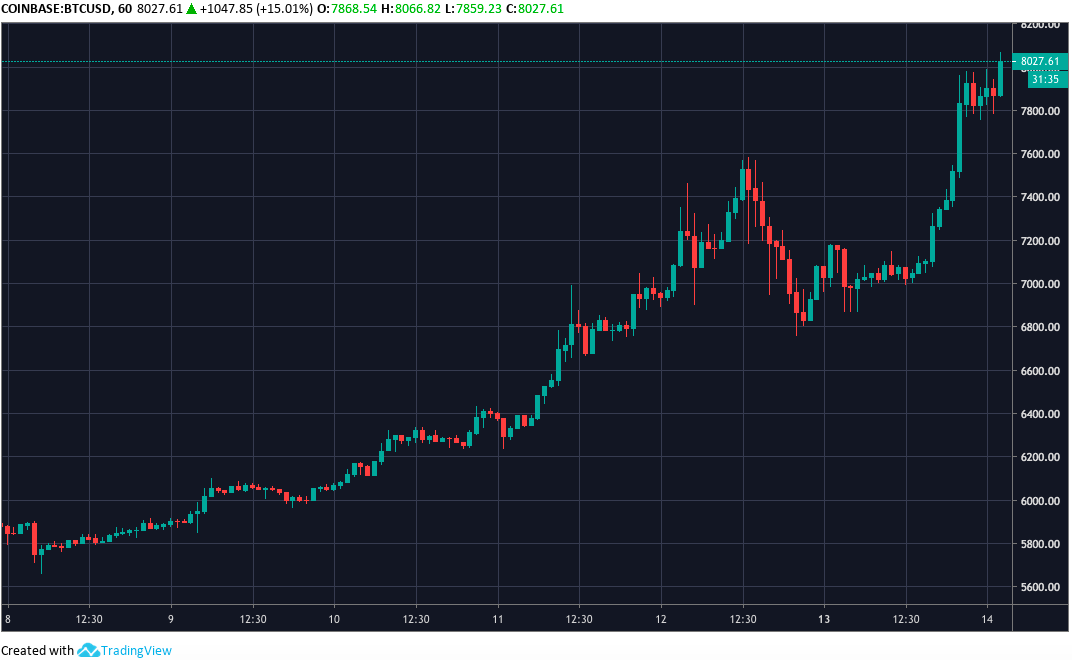 The coin made this break-through right after two major developments: one from Microsoft and the other from Bakkt. On the one hand, the CEO of Bakkt, Kelly Loefller announced that the Bitcoin futures contract is anticipated to launch in July this year on Federal regulated exchanges. On the other hand, Microsoft announced the launch of a decentralized project, Ion, on Bitcoin blockchain.

“Today, we’re pleased to update you on the launch of bitcoin futures contracts developed by Bakkt in collaboration with ICE Futures U.S. and ICE Clear U.S […] User acceptance testing for bitcoin futures custody and trading planned for July”

“I said Back in December that when bull market is confirm, Bakkt will miraculously obtain the regulatory approval that they claimed was holding up the December launch. Coincidence????”

“So insiders front ran Bakkt news the last week or so, which is the reason we’ve had this insane pump. Makes sense, now retail people will FOMO and buy the bags the insiders are selling at the top.”

The post Bitcoin [BTC] smashes $8000 on the back of Bakkt’s Bitcoin Futures contract launch in July appeared first on AMBCrypto.