Bitcoin [BTC] and the fear of missing out [FOMO] has been a tryst for the ages. Ever price rally has been accompanied by waves of speculators chiming in, fearing losing out on a chance to capitalized as the top cryptocurrency defied expectations, this current rally is no less, and exhibits a contagion of FOMO.

On the back of several Bitcoin Futures contracts facing imminent liquidations, the expectation of correction was spreading as Bitcoin broke $6,000 a few days back. Now, as the king coin ascended over $7,500 many are suggesting that the FOMO kicked in while others suggest it is on the five-figure horizon.

Among these speculators is the ardent Bitcoin bull, Fundstrat’s Head of Research, Tom Lee who strutted his SWAG at $10,000. In this context, Lee’s SWAG relates to the military abbreviation for Scientific Wild Assed Guess [SWAG], which he uses to suggest the FOMO of those skeptics who envisaged a BTC 90 percent price crash.

Using the quite straight-forward acronym, Lee suggested that the price point where the FOMO would drive these nay-sayers into yay-sayers is $10,000. Given how the price has rallied, and in light of the several five-figure predictions for Bitcoin come the end of the year, Lee might be proven right sooner than expected.

To provide further market or community sentiment, Lee posted a poll, asking his followers at what price level they expected FOMO to kick-in. With just over 5,000 votes, 44 percent of the respondents backed Lee’s $10,000 prediction and 36 percent suggested that a new peak over the December 2017 ATH of $20,000 would need to amass to bring in FOMO, while one-fourth of the respondents opined that the fear is already in the air. 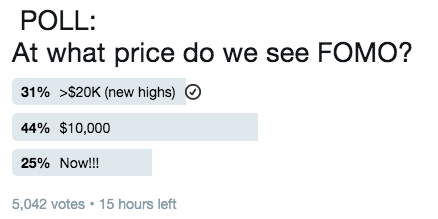 Additionally, Dovey Wan a founding partner at Primitive Ventures also chimed into the FOMO debate, suggesting the Asian markets will have a crucial role in determining the upcoming push. She suggested when the Asian markets “wake up”, the FOMO will “pump.” Her tweet stated:

“When Asia wakes up, the FOMOs gonna pump it REALLY hard
Also given its 3 days holiday in HK, banking wire is close, no way to get USD trading supply or any kind of offshore fiat on ramp, so it’s even more under supply and over demand
I LOVE breakouts happen during weekend”

Since the aforementioned two tweets were posted, Bitcoin broke past $7,300 and soon after pushed over $7,500 both notable resistance levels, corresponding to the currency conversions of China and Japan, is the FOMO materializing? Or are we in for an imminent push based on fear?

The post Bitcoin [BTC] on the tipping point; when will the FOMO kick in? Or has it already? appeared first on AMBCrypto.