Many countries in South America are struggling with economic frailty, with domestic fiat currencies of many falling in value under the pressure of inflation.

Argentina has been one of these countries and it continues to struggle with a depreciating economy and high inflation. According to recent reports, Bitcoin [BTC] has emerged as a better store-in-value and people would have benefited more if they had bought the digital asset at its peak and held it, rather than holding their native fiat, Peso. 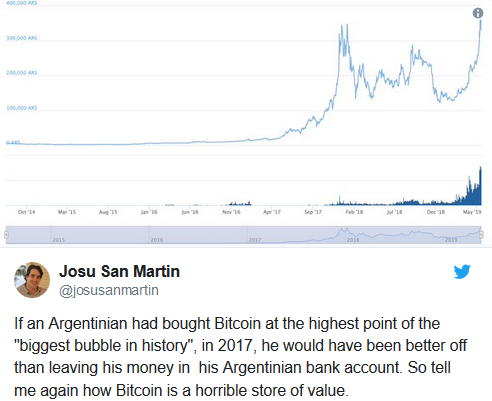 Previously, Steve Hanke had mentioned that the inflation rate declared by the Argentinian government, which was around 55.80 percent/year, was not accurate, stating that it was almost as high as 89 percent/year.

A high inflation rate of that magnitude eroded the purchasing capability of the country’s native fiat, the Peso. Therefore, the idea of Bitcoin rescuing Argentina’s economy is now, a viable option. Despite the volatility of digital assets such as Bitcoin [BTC], cryptocurrencies are slowly proving to be better than gold in terms of store-in-value. With more and more financial and non-financial institutions embracing cryptocurrencies and its underlying technology, its prominence in the financial ecosystem is also on the rise.

Citing all these reasons and the deflationary characteristics of the Peso, Josu San Martin commented that Bitcoin [BTC] was a better store-in-value than Argentina’s fiat currency.

Tim Draper, a massive Bitcoin Proponent, had also recently advised President Macri to replace Peso and announce Bitcoin [BTC] as Argentina’s national currency, in a bid to significantly improve the country’s economy. The American venture capitalist had suggested that it would attract many more foreign investors if Argentina carried out the aforementioned change.

The post Bitcoin [BTC] has emerged as a better store-in-value than Peso in Argentina, claims Bitcoin Maximalist appeared first on AMBCrypto.