European Central Bank, the central bank for euro and the entity administers the monetary policy of the European countries, released an occasional paper titled ‘Crypto-Assets: Implications for financial stability, monetary policy, and payments and market infrastructure’.

Under the section ‘Potential implications for monetary policy’, the bank stated that Bitcoin [BTC] and other cryptocurrencies currently do not “fulfill the functions of money”. It also stated that digital currencies do not impose “tangible impact on the real economy” and that they do not have “significant implications for monetary policy”. However, the bank mentioned that this situation could change if cryptocurrencies were to be considered as “credible substitute for cash and deposits”.

The report stated that that the low number of merchants using Bitcoin as a mode of payment for their goods and services acts as an indicator that the largest-cryptocurrency has “no influence” on “price-setting at all”.

“The high volatility of crypto-assets, absence of central bank backing and the limited acceptance among merchants prevent crypto-assets from being currently used as substitutes for cash and deposits, as well as making it very difficult for crypto-assets to fulfil the characteristics of a monetary asset in the near future”

To add on, the report stated that Bitcoin [BTC] and other cryptocurrencies were not “effectively competing against cash and deposits”, adding that the its “implications for economic developments and monetary policy are similar to those of other asset markets”. The report further explained the reason to be its limited “linkage to the wider financial system” and the significantly small size of the cryptoverse.

Further, the report also detailed about stablecoins, adding that the officials were still monitoring them. It stated,

“In this regard, it remains to be seen whether algorithmic stablecoins can effectively offer the very substantial reduction in price volatility that a wider adoption would be likely to require. By contrast, stablecoins could become less volatile if the coins were collateralised by central bank reserves, for example.”

The bank went on to state that stablecoins backed by central bank reserves “could result in additional demand” for the said reserves, thereby having implications for monetary policy and its implementation. The bank said, “however, such collateralised stablecoins are not crypto-assets”

On cryptocurrencies risk to financial stability, the bank stated, 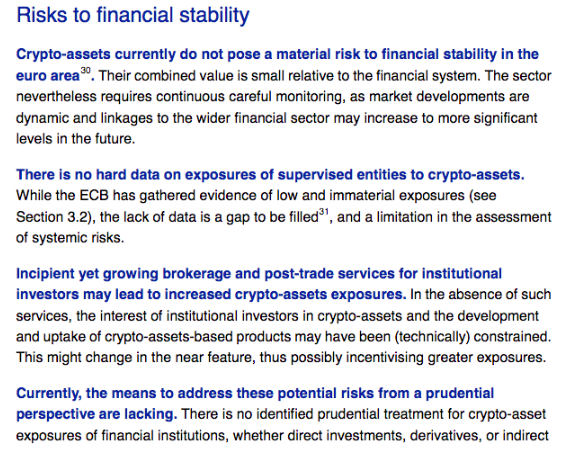