Bitcoin [BTC] and the recent $8,000 break-out is massive for the cryptocurrency market going forward. On the back of no major announcement in the past few days, and the pull-back of the previous week, the king coin won its second battle against the price ceiling curating a major high, in the form of an exhibited low.

As the May 19 bulls rampaged the market, buoying the top cryptocurrency to rise by 7 percent in the hour earlier today, a new High-Low [HL] was seen at just below $7,100 which sparked signs for the foundation of a $9,000 break-out. With Bitcoin trading above $8,000 and showing marginal gains off-late, a continued run is foreseen by many in the community.

Given that the king coin edged below the aforementioned price point last week, and dropped quickly to a low of $7,100 during the anticipated “pull-back,” although with compounded reasons pertaining to the post-Consensus bears and the Bitstamp sell order, the recent incline over $8,000 is a positive sign.

CryptoMonk, a Bitcoin and altcoin trader and host of the crypto-monsoon podcast, ironically, attested to Bitcoin’s continued ascent into crypto-spring. He tweeted:

“$BTC has just successfully printed another HL.
It’s a matter of time before we see + $9k.”

The trader supported his statement with a chart depicting the various HLs exhibited by the coin in the past few months. Prior to the HL of $7,100, the previous one was seen just below $7,000 and the one before that was around $5,500 during early May when the FOMO had not set in yet. 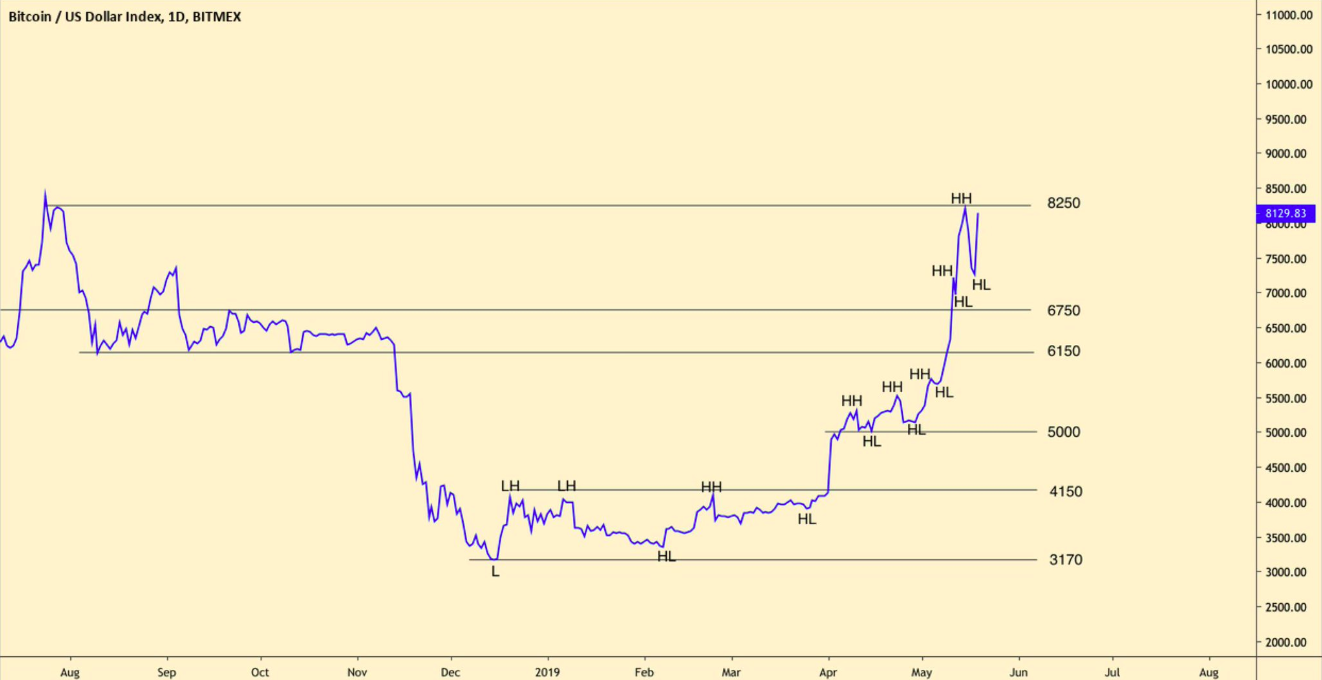 What is even more surprising, is the fact that there is no real source of Bitcoin’s current 10.16 percent daily gain. Unlike the earlier $8,000 ascendance, which was on the back of several announcements involving Bakkt, Gemini, Microsoft, and Amazon.

Interestingly, the recent price surge mirrored the April incline, as there was no real indicator for the pump. Yes, several signs in the form of an April fool’s joke, China-BTC-mining ban FOMO, and a large automatic buy order were touted as the source, none could be confirmed as the primary push. This April 2 push was the foundation for the successive BTC pumps over $6,000, $7,000 and now $8,000 with $9,000 on the cards.

CryptoMonk did issue a cautionary tone prior to a likely confirmation of a $9,000 breakout. The High High [HH] which stands at $8,260, formed on the back of last week’s pump before the “pull-back,” will act as a resistance of some sort, and if the same is broken, a constant push will, more or less, be a high possibility.