Binance exchange, even after its fair share of problems, has managed to retain its reputation throughout the cryptoverse. The cryptocurrency exchange recently released a research report that detailed the comeback of fiat-backed stablecoins, in terms of adoption and trading pair usage. It also highlighted the inevitable rise of many stablecoin-related projects that are aimed towards expanding the use-cases and reach of these coins, beyond USD barriers.

A comparison between the previous year and the current year’s 24 hour Quote Asset volume indicated the growing popularity of stablecoins on Binance. 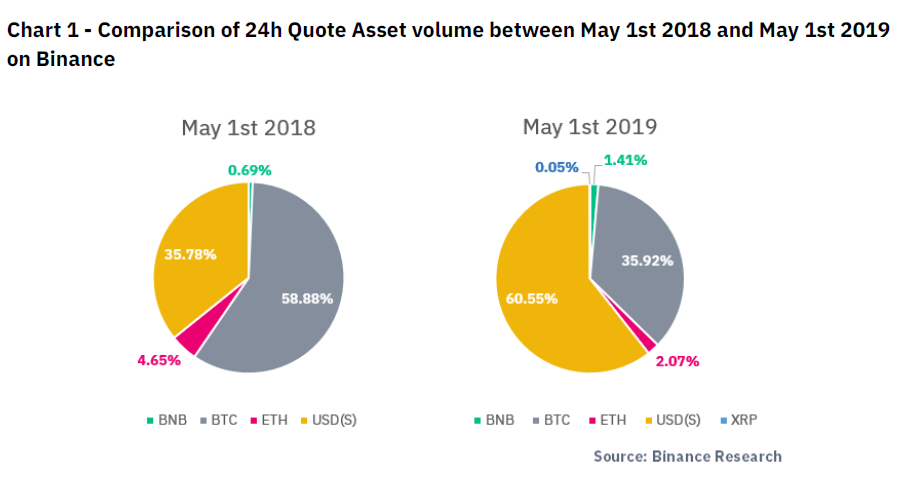 Quote asset volumes driven by stablecoins such as PAX, TUSD and USDC on Binance (denoted as USD(S)) recorded a 69% increase in the market share. Interestingly, the share of volume in BNB pairs also doubled during the same time period, making a jump from 0.69% to 1.41%. As a result, BTC pairs have lost almost 40% of its market share. The report attributed this change to the “introduction of several stablecoin pairs with new quote assets and base assets.”

Out of all the trading pairs, USD Tether (USDT) saw the largest net inflow, with a total increase slightly below
$1 billion. Among the non-USDT stablecoins, USDC was the biggest gainer in circulating supply, seeing
an inflow of nearly 60 million USD in January. Out of other trending stablecoins, GUSD was the only stablecoin not to have an inflow in any of the four months, displaying a continual net redemption trend.