Bitcoin [BTC], the largest cryptocurrency by market cap, stepped into its 10th year this year. The coin that grabbed the attention of the entire world by reaching nearly $20,000 towards the end of 2017 has been either accepted or rejected by government bodies and financial institutions. Some regulatory bodies have started to go the extra mile to encourage technological growth and be more crypto-friendly. While others have often brushed off any discussions pertaining to the digital currency.

The cryptocurrency was again placed in the limelight when the European Central Bank released a report titled ‘Crypto assets: developments and perspectives’. The bank stated on Twitter,

“Crypto-assets like #bitcoin are increasingly popular but are volatile and speculative, and they are not currencies. New technologies like #blockchain enabled their emergence.“

In the Euro area statistics blog post, the bank remarked that Bitcoin and other cryptocurrencies as “relatively recent phenomenon”. The blog also pointed out that the increasing popularity of digital assets over the past ten years has “resulted in a growing number of trading platforms and an expanding variety of new crypto-assets.” The report highlighted that cryptocurrencies were “highly volatile” and that their “combined value is small relative to the value of euro banknotes in circulation or other asset classes.”

“As a comparison, total issuance of electronic money in the euro area (excluding the Eurosystem) reached more than €9 billion in May 2018. In 2017 commercial banks accounted for approximately 70% of this electronic money issuance.” 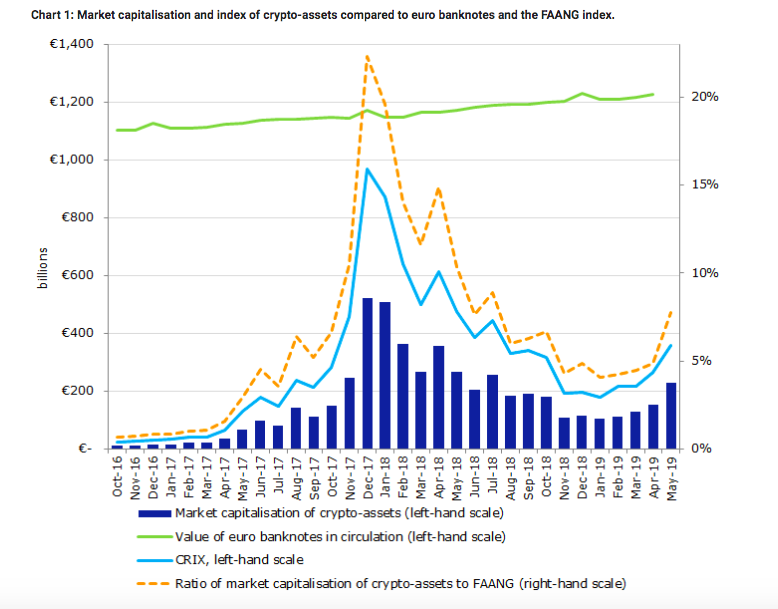 Further, the bank affirmed that the cryptocurrencies were not “currencies”, adding that they “differ” from money and electronic money. The blog added that these digital currencies did not have “legal status” or a “distinct legal framework”, with no regulatory oversight.

“The absence of any specific institution, such as a central bank, protecting the value of crypto-assets makes them unsuitable for use as a form of money. Moreover, the pronounced volatility of crypto-assets and their limited acceptance by merchants discourages their use as a store of value or means of payment […]

“Hahahhaa your monopoly is coming to an end… How do you feel knowing that you are going to have to work? Creating money out of thin air will end soon. Elite is becoming part of the mass.”

Blockchain technology exists because Bitcoin exists. It can not be separated. Moreover bitcoin (expecially BCH) is a peer to peer electronic *cash* system. It’s volatile but who cares? On average the value increases because it can’t be printed out of thin air.”

The post Bitcoin: Absence of central bank protecting value of crypto makes it unsuitable to be money, says ECB appeared first on AMBCrypto.