Initial Exchange Offerings [IEO] is usually referred to as the concept replacing Initial Coin Offering [ICO]. More so, several new projects are opting to raise funds via an IEO instead of an ICO, considering the fact that top exchanges are the ones providing this service.

Binance, one of the largest exchanges in the world was one of the first exchanges to introduce a token sale platform, Binance Launchpad. The platform conducted a token sale for nine projects, with the most significant one being the BitTorrent token sale. A recent report by BitMEX research on Initial Exchange Offerings revealed that Binance was the largest Initial Exchange Offering platform.

Additionally, the exchange raised a total of $17.3 million in IEOs so far, with BitTorrent being the largest token sale on the platform since it raised $7.5 million via the IEO. The second largest token sale that took place on the platform was the Celer Network, with the project raising $4.5 million, and the third largest was Fetch.AI, with the project raising $4.1 million.

Notably, other exchanges providing token sale services on the platform include Huobi, Bittrex, Okex, BitMax, and KuCoin. So far, Huobi has held two token sales on its platform, for TOP and Newton, and secured the second position after raising a total of $8.1 million. Bittrex stood third with a total of $7 million for one project, VeriBlock.

“The number of IEOs taking place has intensified in recent months, as the model is proving somewhat successful. Smaller exchange platforms are attempting to replicate the model [..] US$38.9m has been raised so far by IEOs in 2019 (up to 25th April). Binance has been the most prolific IEO platform by a considerable margin.” 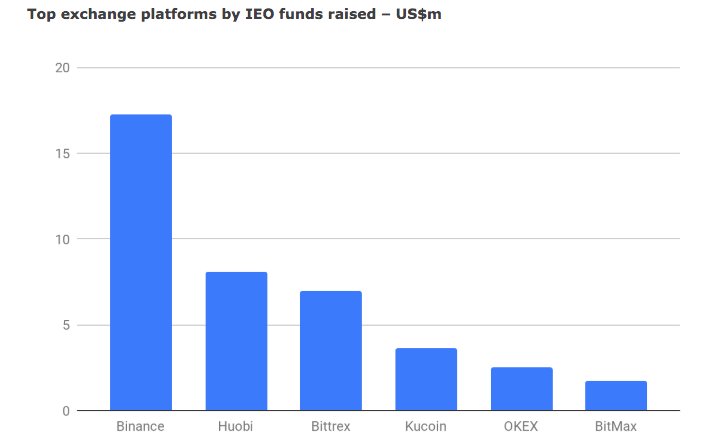