The cryptocurrency market recently saw a shift in the positions of two major coins on the CoinMarkeCap list – XRP and Ethereum [ETH]. Ethereum overtook XRP to promote itself to the second position and ever since, XRP and Ethereum have been in a tough fight for the spot. However, this game has been disrupted by an XRP FUD on Twitter.

On February 13, the members of XRP community and other holders started getting tagged in random people’s Twitter posts which asked them to not buy XRP as its team of developers were quitting to create another project, demotivating possible investors from buying the third-largest token.

These users are speculated to be bots by the members of the XRP community and it has been noticed that the same profile is tagging numerous other people and ‘warning’ them about the XRP dev team’s exodus. 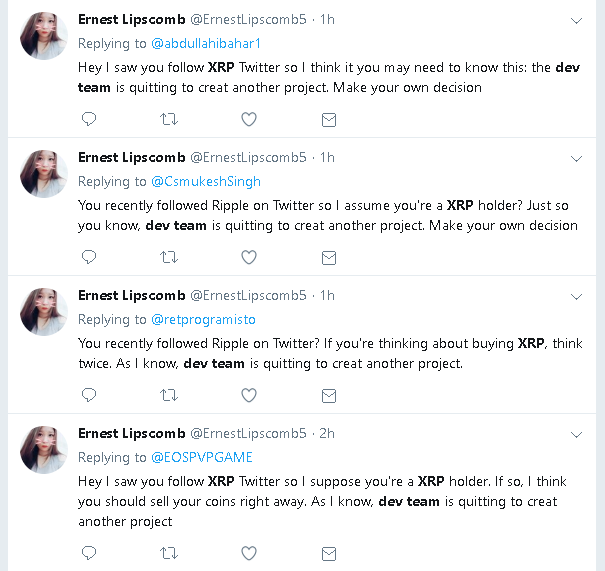 One Twitter user @jeremy_87110 identified this ongoing trend and warned the community about the “anti-XRP” bots with no followers or following only those who are flooding people’s pages with such messages. 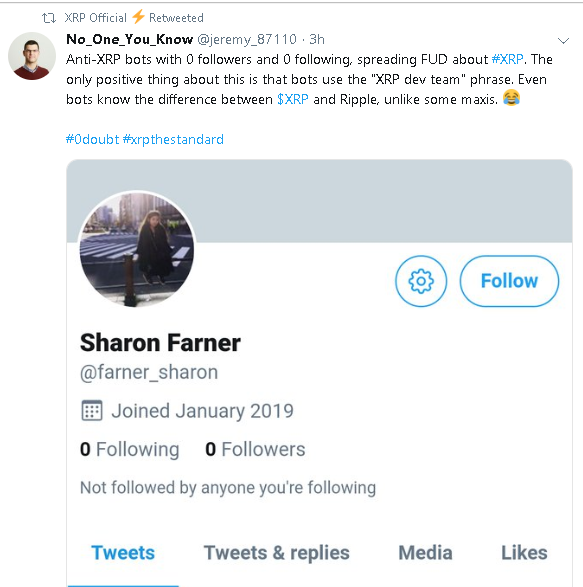 However, some members of the community laughed at this activity by the bots. Twitter user @Ahuerta17, replied to one such bot:

“Thanks for the info, didn’t know the dev team had abandoned the project! I’m going to sell all my XRP right now!!! #satire”.

“This is terrible behavior, but possibly the most bullish news in a while!

On a serious note, new investors deserve much better.”

Tiffany Heyden, a popular XRP proponent, was also made aware of this on-going FUD and she tweeted back saying:

What the hell? You are right. There are bots tweeting to individual users, warning them about XRP. I would say report them all, but reporting too many accounts might put your own at risk.
cc: @TwitterSupport
$XRP #XRPCommunity”

The active members have reported about this activity to Twitter and have reported these accounts but with new accounts popping every minute, it might get tedious for Twitter to act on this request. People have started speculating the reason or the person behind this act but could not put their finger on just one.