The previous application, that would have received a final decision by late February or early March, was withdrawn by the CBOE last time citing the effect of the government shutdown on the working of the SEC. With respect to why they had chosen to withdraw the Bitcoin ETF application last time, Jan Van Eck said:

“So technically, as you know, the SEC is affected by the shut down. So we were engaged in discussion with the SEC about the Bitcoin related issues, custody, market manipulation, prices and that had to stop. And so, instead of trying to slip through or something, you know, we just had the application pulled and we will refile and re-engage in the discussion. So, when the SEC gets going again.”

However, CBOE, along with Jan Van Eck and Global X, made good on their promise to re-file as soon as the government shutdown came to an end. The decision to re-file the application for a cryptocurrency exchange-traded fund was announced by Van Eck’s Digital Asset Director/Strategist Gabor Gurbacs. 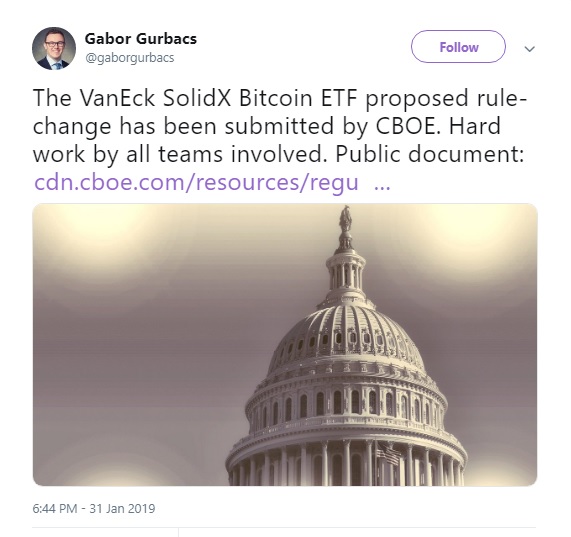 The new application for the ETF, dubbed the Solid X Bitcoin Shares ETF, however, isn’t the same one as the one submitted previously. In fact, as has been reported, it is ten pages longer and attempts to quell any concerns the SEC may have about a Bitcoin ETF. With the new application, CBOE has sought to address concerns such as market volatility, liquidity and price manipulations, factors that have contributed to the SEC turning down previous ETF applications, such as the one filed by the Winklevoss brothers.

If the SEC were to grant the rule change and allow the Bitcoin ETF to be listed, many in the cryptocurrency community would recognize it as a significant step towards the wider use of cryptocurrencies. An ETF would attract institutional investors who could keep track of how the market is performing without the risk of actually owning its shares. The ETF if granted, would also lend a modicum of credibility to cryptocurrencies, spurring its wider adoption.

The post VanEck/SolidX Bitcoin [BTC] ETF re-filed by CBOE with the SEC a week after it was withdrawn appeared first on AMBCrypto.