In what could be a sign of the troubles Tron may face, ChaChing Wallet’s CEO Thomas Schulz has claimed that he has received some ‘advice,’ requesting him to stay away from Tron. This development follows days after Tron and its community members were publicly slammed by Craig Wright on Twitter.

Craig Wright, notable for his not-so-diplomatic outbursts and takes on rival projects, had just slammed Tron as a ‘retarded project’ while also calling the many who support TRX ‘dumber than dirt’ recently.

According to Schulz, the advice which came to him from the well-connected United States Securities and Exchange Commission [SEC] insider simply asked him to “Stay away from Tron”. Whether this is true or not isn’t certain, but Schulz’s tweet caused quite a reaction online, with some suggesting this is part of another smear campaign launched against the Tron project. 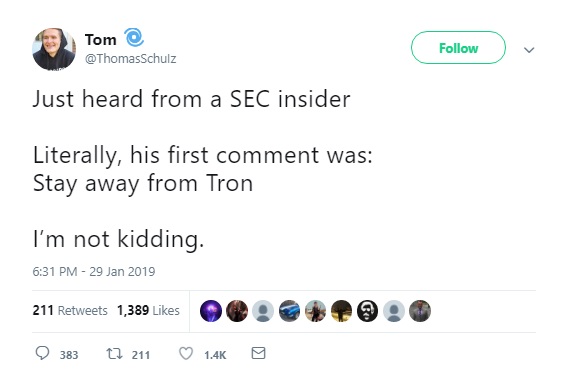 And while Schulz outrightly dismissed his tweet being part of a smear campaign, he did emphatically state that Tron isn’t a fruitful project. 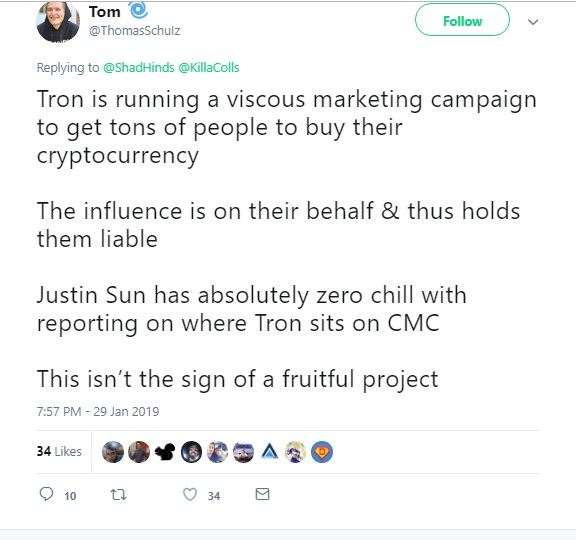 Schulz was, however, forthcoming to a lot of questions raised following his tweet. For instance, there were many who pointed out how the SEC would have jurisdiction considering Tron was a Chinese corporation, to which he replied:

“They have an office in the United States (San Francisco) & have US citizens holding a coin that could arguably be a security. Not to say that these are the reasons, but I’m merely reporting what I was told & the source was credible.”

What this warning/advice would mean for the Tron project and its community is unclear. However, if one were to believe it to be true, it puts American citizens who hold TRX coins at risk. And while Schulz has stated that he doesn’t know why the SEC would take any action against Tron so soon after the end of the government shutdown, he does suggest that it could be because there are American citizens holding a coin that is arguable security. 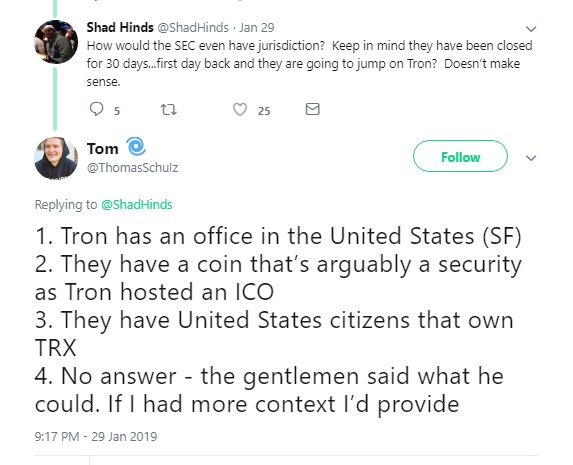 Schulz has also dismissed allegations of this ‘warning’ being an instance of insider trading as in his mind, it didn’t count as financial advice.

Finally, Schulz has also dismissed the notion that he’s spreading Fear, Uncertainty, and Doubt about Tron by stating:

“I can see the perspective of how this could be classified as FUD. I just know I’d regret/feel bad for not sharing information that came my way.”

The post Tron [TRX] should to be stayed away from, SEC insider warns ChaChing’s Thomas Schulz appeared first on AMBCrypto.