In what would constitute a plot twist, a noted cryptocurrency researcher has suggested that there are no identifiable cryptocurrency reserves, whether Bitcoin [BTC] or otherwise, available for QuadrigaCX. The research, posted by Crypto Medication through a post on Medium, also makes a few other findings which if true, would have the potential to rock the cryptocurrency market.

QuadrigaCX, once Canada’s largest cryptocurrency exchange, has been in the news lately after it claimed that it had lost access to $150 million worth of cryptocurrencies in a cold wallet reserve after the untimely death of its founder, Gerald Cotten, in India. The exchange had previously been in the news after the Canadian Imperial Bank of Commerce froze the accounts of QuadrigaCX’s payment processor last year. 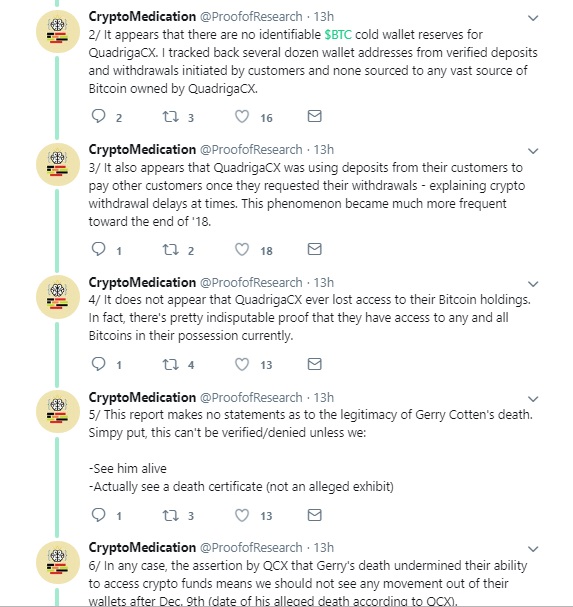 The researcher claims to have tracked back several dozen wallet addresses from verified deposits and withdrawals initiated by customers and found that none of them sourced to any vast source of Bitcoin owned by QuadrigaCX. Crypto Medication also argued that the exchange’s claim that they have no access to any reserve could be a lie as if this was so, there shouldn’t have been any movement out of QuadrigaCX’s wallet. However, this hasn’t been the case, he has suggested.

Finally, Crypto Medication has through his research, also claimed that the Canadian exchange never had any reserves of their own and were instead, using deposits made by customers to pay those who wished to withdraw.

Despite the implication however, Crypto Medication makes no claim to refute the news of Gerald Cotten’s death.

Crypto Medication’s in-depth analysis of QuadrigaCX’s holdings used the empirical evidence provided by the blockchain to investigate and arrive at the conclusion offered. If found to be true, this would be in line with Kraken’s Jesse Powell’s thoughts on the case. Powell had called the case ‘extremely suspect’ and had even suggested that Canadian authorities investigate. 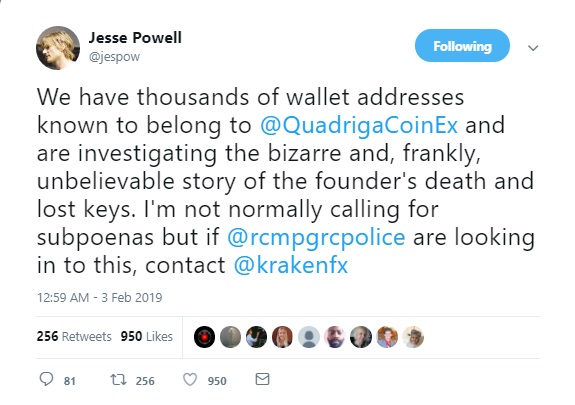