Mt. Gox, a Bitcoin cryptocurrency exchange, has always been a major player in the cryptocurrency space. The exchange platform is said to have played a major role in the adoption of Bitcoin [BTC] in the past. However, it soon came crumbling to the floor because of a hack, resulting in the loss of over 7% of the Bitcoins in circulation in 2014. 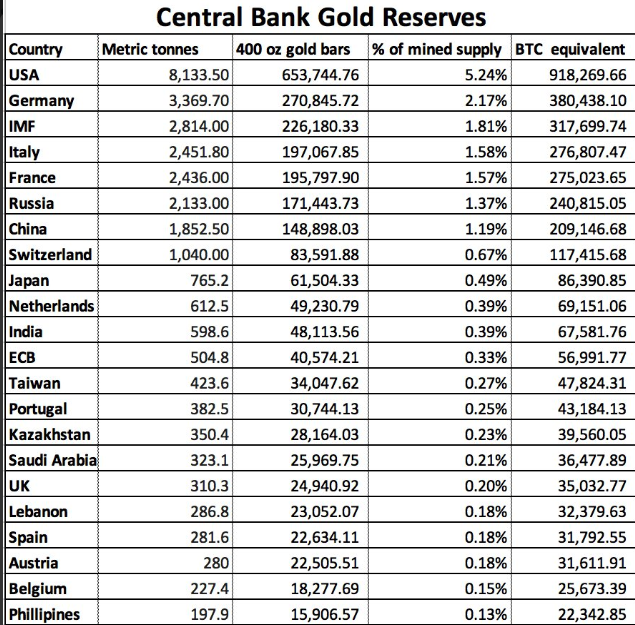 “Allows for fun comparisons, e.g.: The MtGox Trustee currently controls 137,891 BTC, which is bigger in terms of market share than the gold reserves of the Swiss central bank.”

This was followed by the Founder speaking about how much the Dutch Central Bank would have to invest in Bitcoin in order to have the same control over the Digital Gold as it has over Gold. He said:

“If the Dutch Central Bank wanted to hold as much weight in the Bitcoin world as it does in the Gold world, it could do that by investing $250M in BTC today. The current value of Dutch Central Bank gold is about $25 billion, so in order to buy 69k BTC (the mined Bitcoin equivalent of the Dutch gold reserve) it would only need to sell 1% of its gold, i.e. 492 gold bars.”

Apart from this, the exchange is currently in the spotlight because of the Gox Rising, which is aimed at reviving Mt. Gox. This movement is lead by Brock Pierce, a cryptocurrency billionaire. The billionaire claimed that he had purchased 88% of the exchange’s stake for 1 BTC and remaining stakes from Jed McCaleb, co-founder of Stellar and Ripple, for 1 BTC again.

However, these claims were shot down by Mark Karpeles, the CEO of Mt. Gox at the time of its hack. He said on Twitter:

“No. No purchase agreement was ever even drafted, and the court didn’t approve the LOI. I didn’t hear of the price until recently either, and Tibanne has no record of any payment for the shares. MtGox official shareholders list doesn’t list Brock Pierce anywhere.”