In the latest episode of Magical Crypto Friends, WhalePanda, Charlie Lee – the creator of Litecoin, Riccardo Spagni – the lead developer of Monero and Samson Mow – the CSO of Blockstream, discussed confidential transactions with Litecoin. Here, Lee spoke about the feature that is missing in both Bitcoin [BTC] and Litecoin [LTC].

This topic was discussed in light of the latest announcement made by Lee on his official Twitter handle. He had stated that the developer team of Litecoin had “spent hours” discussing about how to add Confidential transactions in the silver digital currency. He also revealed that the team is looking into doing bulletproof MimbleWimble without extension blocks.

“Fungibility is the only property of sound money that is missing from Bitcoin & Litecoin. Now that the scaling debate is behind us, the next battleground will be on fungibility and privacy. I am now focused on making Litecoin more fungible by adding Confidential Transactions.” 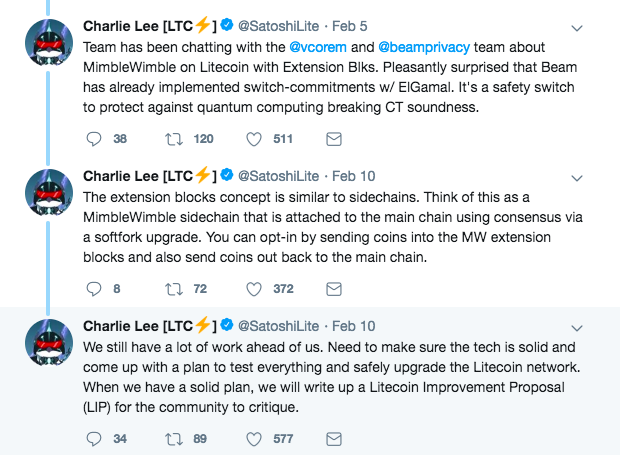 During the discussion, Lee stated that the one property of money that is currently missing in both Bitcoin and Litecoin is fungibility. He went on to say that privacy and fungibility were very important factors and that this is going to be next “battleground” for the cryptocurrencies after Segregated Witness [SegWit]. He said:

Confidential Transactions aka CT is one of the well-known privacy features in the space that enables the sending and receiving addresses involved in a transaction to stay hidden. This feature was created by a former Bitcoin developer, Adam Back.

“Efff the institutions its FUN-gibility time! Time to put the last piece of the money puzzle together. The “institutions” should be transparent and the people deserve privacy. Anyone with their head out of their A$$ understands why.”