Litecoin [LTC]’s pursuit of privacy and confidential transactions is surging ahead after Charlie Lee confirmed being in talks with Beam for the implementation of MimbleWimble. This marks a significant development in what could possibly be a game-changer for the coin.

Lee, the creator of Litecoin, a silver coin to Bitcoin’s gold has been assertively moving ahead to provide the coin with fungibility and privacy solutions. Charlie Lee’s announcement of putting scalability behind to pursue privacy and the implementation of Confidential Transactions in Litecoin was met with a lot of fanfare. He later announced that the LTC development team was exploring options such as bulletproof MimbleWimble, which was equally well received. 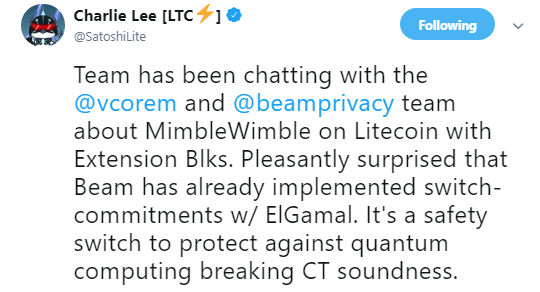 Beam is the first cryptocurrency project to be built on the MimbleWimble protocol and offers a range of privacy solutions that are alien to other coins in the market. It also claims to be more private than other privacy coins such as Monero and Zcash while offering to be the best ‘storage of value’ option in the cryptocurrency market. The CEO of Beam had, in fact, on its launch on the 10th anniversary of Bitcoin, highlighted the principle that drove the development of Beam.

“Sovereignty over one’s own information is a basic human right, and applies to all aspects of life, and especially to financial transactions.”

The MimbleWimble protocol allows the user to encrypt all data with respect to a transaction made on the cryptocurrency network. This is done by the use of blinding factors, that allow an extra layer of security to all transactions. Additionally, MimbleWimble also uses CoinJoin, a mechanism that combines multiple payment info to form a single chain of the transaction, thus hiding any individual transaction info in a cryptographic haze.

Despite confirmation of talks with Beam, Litecoin will not be reiterating a similar implementation of the protocol as the privacy coin. Lee has already dismissed any question of LTC implementing the Switch or ElGamal commitments fundamental to Beam as LTC will be implementing bulletproof MimbleWimble with extension blocks instead.

However, as the tweet suggests, he has also been appreciative of Beam’s own efforts as he feels the Switch Commitments with ElGamal are a safeguard against the risk quantum computing poses to the soundness of Confidential Transactions.