Many in the Litecoin community, and by extension, the cryptocurrency community, cheered when Charlie Lee announced his intention to introduce privacy and confidential transactions features to Litecoin and make it more fungible. However, in what could prove to be a dampener on things, Litecoin’s Community Manager has come forward and implied that all is not final yet.

Charlie Lee had announced that he was putting the issues of scalability behind him and was focusing on making Litecoin more fungible by implementing privacy and confidential transaction features. He had also suggested that such implementation would require a mere soft fork and would be done sometime in 2019.

However, Ilir Gashi, LTC’s Community Manager, issued a clarification in this regard today. 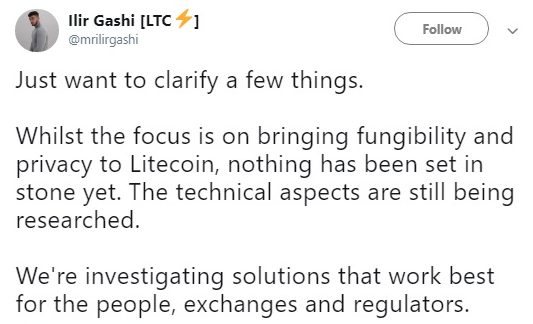 The tweet implied that everyone’s expected fungibility and CT update may not come as soon as expected, or even in the same form as people believe it would be implemented. The fact that Gashi stated that ‘nothing is set in stone’ also suggests that LTC is still considering all options, including any that do not involve CT, but instead, just contribute to raising the coin’s fungibility.

What is also interesting about the tweet, according to Twitter enthusiasts, is the line ‘We’re investigating solutions that work best for people, exchanges and regulators’. This obviously has raised concern in the LTC community, with some even questioning how LTC’s fungibility and regulators can actually go hand-in-hand, especially since it’s supposed to be a decentralized digital currency.

Finally, it could also suggest that the team behind Litecoin is playing it safe by trying to pursue a strategy that introduces something new without disrupting the cryptocurrency ecosystem, according to some enthusiasts.