JP Morgan Chase, the biggest bank in the United States of America, valued at about $340 billion dollars, has announced that it was going to launch its very own stable coin cryptocurrency named JPM, which will be implemented to instantly settle payments between clients. However, competitor Ripple and its CEO had differing opinions to offer on this development.

The investment bank moves more than $6 trillion around the world for massive cooperation payments and settlements business. According to the institution, which is a banking partner to about 80% of the Fortune 500 Companies, only a tiny fraction of payments will initially be transmitted using the cryptocurrency. Even so, the trial represents the first real-world use of a digital coin by a major US bank.

The CEO of Ripple, Brad Garlinghouse, responded to the announcement on Twitter, saying that JP Morgan is missing the point with its new cryptocurrency. 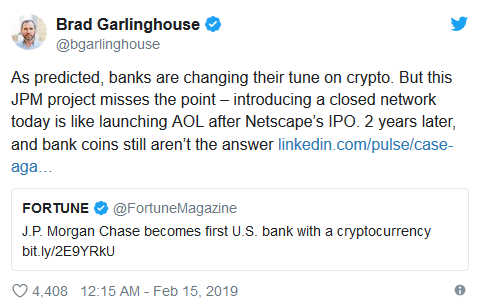 In 2016, when the Utility Settlement Coin was announced, Ripple CEO Brad Garlinghouse had predicted that he believed bank-backed cryptocurrencies would fail, in an Op-ed titled  “The Case Against BankCoin”.

“A bank-issued digital asset can only really efficiently settle between the banks who issued it. Then, two scenarios can play out. Scenario one: all banks around the world put aside competitive and geopolitical differences, adopt the same digital asset, agree on its rules, and harmoniously govern its usage. Fat chance. Scenario two (the more likely scenario): banks not in the issuing group issue their own digital assets with their own sets of rules and governance.”

“The second big problem with the ‘utility settlement coin’ is it seems it’ll be backed by a basket of currencies. Once backed by cash, it’s no longer an asset; it’s a liability. Trading liabilities then ultimately requires moving cash across borders, re-creating today’s system but adding more friction!”

Garlinghouse further put forward the case of XRP being the premiere option for banks to bring independent digital assets into the picture. According to him, XRP is the best shot at truly bringing payment systems into the modern era.

However, Joe Weisenthal, co-host of Bloomberg’s “What’d You Miss?” segment, has said that he fails to see Ripple’s XRP compete with the forthcoming JPM coin. He stated:

“If it turns out that the Blockchain/Coin framework to be a good one for banks transferring money around, then the JPM Coin should absolutely obliterate Ripple. Think about it, let’s say you were in the business of transferring money, why would you take on the exchange rate volatility risk associated with having Ripple as a bridge currency, when you could have a fiat-coin backed by JP Morgan. No brainer.”