In the era of digital media, the major threat to free expression comes not from predatory governments but from corporate entities that came to control the flow of communication.

The incumbent media economy, which is based on commodifying user attention and turning profits from ad targeting, has endowed a handful of profit-driven platforms with enormous power to shape the ways people interact online. It is now corporations that pass judgment on what constitutes legitimate or illegitimate speech in the new public arena.

Those who really keep the wheels of the digital economy turning – content creators, community administrators and moderators – have taken a back seat, largely unable to benefit from the value they generate. Many of them set out to explore alternative monetization models, often taking to services that enable the flow of individual subscriptions and donations from content consumers to creators.

But at some point, it became apparent that these centralized payment systems are hardly just providers of value-neutral financial infrastructure that they often claim to be. The recent exodus of prominent right-leaning public personalities from the crowdfunding platform Patreon is perhaps the most salient example.

The trouble with Patreon

Political speech and money that fuels it are closely intertwined. Previously, many high-profile figures on the political right have accused social platforms like Facebook and Twitter of stifling conservative voices by selectively implementing their anti-hate speech to block and ban users based on their politics. 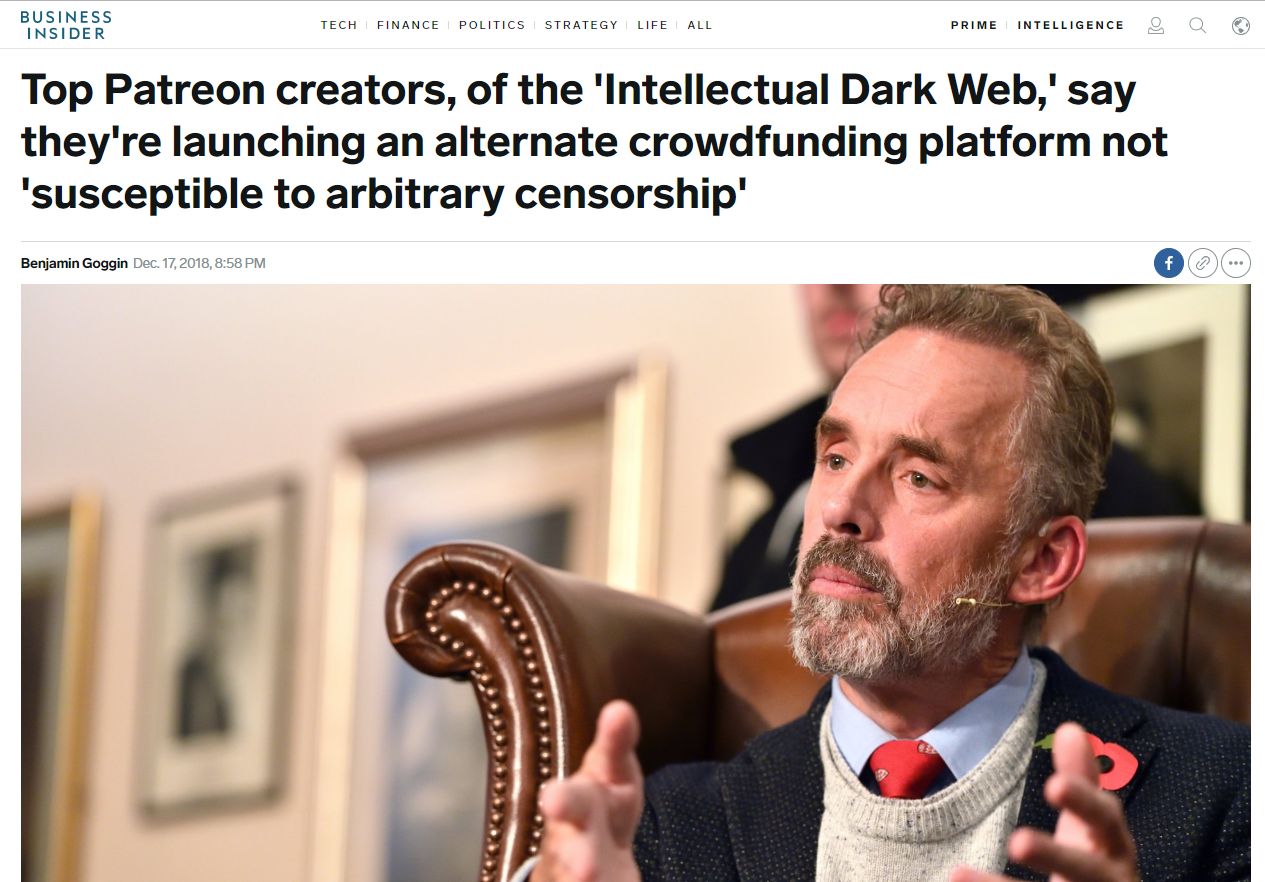 Towards the end of 2018, allegations of liberal bias spilled over the narrow circle of content-hosting websites to payment systems and crowdfunding services. A wave of backlash against Patreon, a service that facilitates user payments to content creators, erupted late in 2018 as the conservative YouTuber known as Sargon of Akkad and the alt-right provocateur Milo Yiannopoulos were barred from the platform. Creators with massive Patreon follower base, such as the author and podcaster Sam Harris and psychologist Jordan Peterson announced they were parting ways with the crowdfunding site over what they perceived as manifestations of arbitrary censorship.

If you do not share values of the new right or those who are disgruntled with so-called cultural Marxism, it is easy to dismiss such cases as a justified exclusion of the obnoxious fringe guys from a respectable conversation. The problem is that while no overarching legal framework exists to chart the limits of platforms’ capacity to implement their homegrown rules for policing speech, these corporate actors are essentially given the authority to allow or suppress viewpoints as they please.

Driven by the logic of profit maximization, centralized platforms will always cater to the views and tastes of the majority, which can lead to suppression of meaningful contrarian opinions that happen to be uncomfortable.

Blockchain entrepreneurs have sought to heal these ills by designing models of content creation and consumption that are independent of a single intermediary’s whims. Several projects emerged whose ambition is to create media ecosystems that offer both a fairer distribution of value between the members of community and safeguards against centralized censorship.

Startups like Civil and Decentralized News Network (DNN) were designed to harness game-theoretic design and affordances of the token economy to create self-sustained, community-driven platforms for creation and curation of news content, free of centralized censorship. These projects, though, are focused rather narrowly on solving the problems of public affairs journalism, and they are not geared towards a broader range of user-generated content.

Halfway in between these platforms for community-supported journalism and decentralized social media for everyone is PUBLIQ, an ecosystem whose creators are mindful of both the uneven distribution of value and the threat of censorship.

PUBLIQ’s protocol is designed to support all sorts of free expression, not confined to “hard” news. Interestingly, unlike most of the other similar models, PUBLIQ’s architecture incorporates advertising as one of the major monetization tools. In contrast to the likes of Facebook, all the revenue derived from ads will be distributed among community members.

Steemit, a blockchain-powered social network that rewards content publishers and curators, is arguably the major player in the space today. Members can earn a small amount of the Steem token if their post gets upvoted; readers can also tip authors directly. Although this model produces a wider dispersal of value than centralized platforms, it still tends to favor a limited share of the most successful creators.

Meanwhile, a new generation of social platforms that harness the power of blockchain technology is already snapping at Steemit’s heels. One of the most ambitious projects in this cohort is HyperSpace, whose economic model leverages a mechanism that might seem radical even for some in the crypto space: the Universal Basic Income (UBI).

It is exactly what it sounds like – a guaranteed amount of the platform’s native AMP token regularly delivered to users. The idea is to distribute the value that community creates between as many of its active members as possible, thus enabling a virtuous cycle where further meaningful activity is reinforced.

One more distinctive feature of HyperSpace’s design is that it provides a means of rewarding group administrators for the often unnoticed, yet valuable work that they do. Along with the UBI, it could provide for a vibrant, self-reinforcing decentralized economy that will allow the widest range of users to extract value from creating and sharing social content. It goes without saying that the system is resistant to centralized censorship, as posts go to a distributed cloud powered by the IPFS technology.

There is hope that emerging projects like PUBLIQ and HyperSpace can get us a step closer than their predecessors to a social media economy that rewards the people who create value rather than corporations that merely provide the infrastructure. Once platforms’ economic power is widely distributed, arbitrary censorship will become impossible, clearing the way for a more robust and inclusive marketplace of ideas.

The post Blockchain vs Corporate Censorship: Decentralization on Guard of Free Speech appeared first on AMBCrypto.