The collective market has turned green but has barely recovered the $8 billion lost earlier this week. Bitcoin Cash [BCH] has however seen a marked improvement, with the coin moving one spot up, edging Tether [USDT] as the stablecoin lost out when the market turned. However, EOS still holds onto the fourth spot with a market cap lead of over $60 million.

Bitcoin Cash broke support and plummeted to a price of $108 but has recovered to $115.18 at press time. The market cap of the coin has managed to float above the $2 billion mark and now stands at $2.036 billion.

In terms of exchange dominance, LBank holds the top spot with $18.94 million or 6.35 percent of the global BCH trade volume in the BCH/BTC trading pair. Following up is LBank again and Huobi Global in the trading pairs: BCH/USDT, BCH/USDT, accounting for 5.53 percent and 5.43 percent respectively. 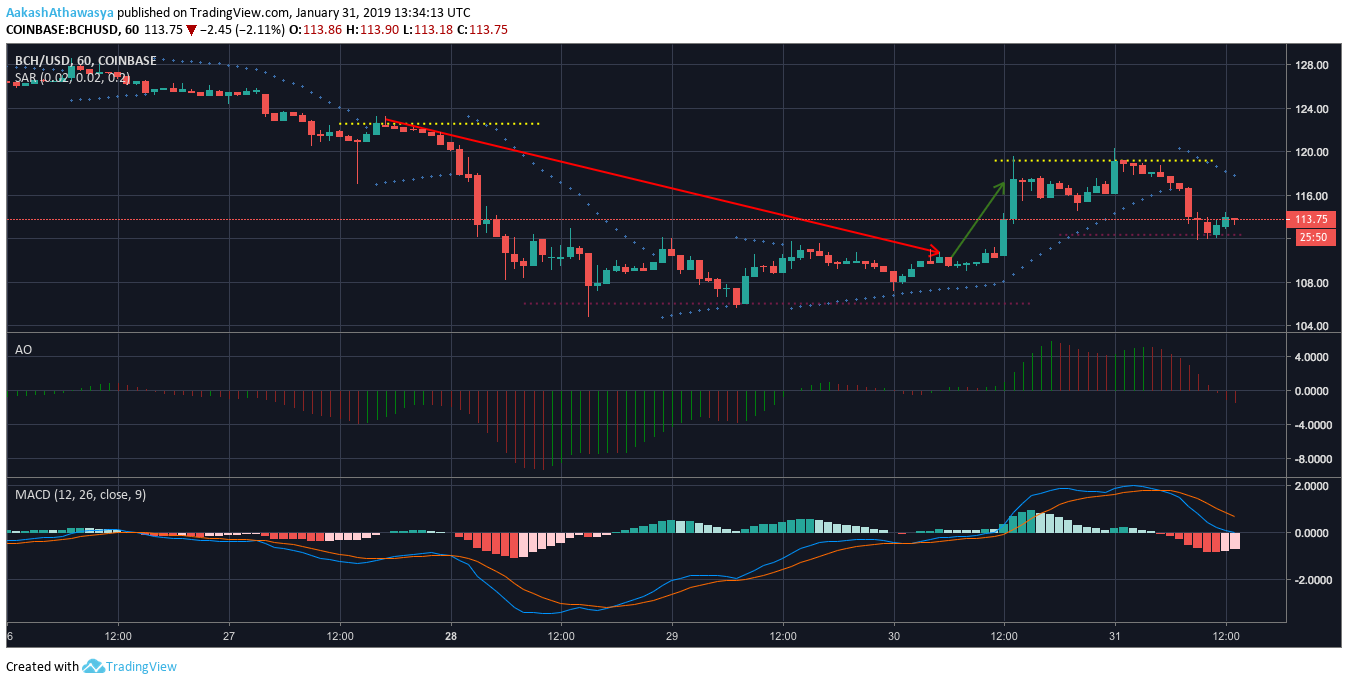 The coin’s immediate resistance level stands at $119.18, which the coin is hoping to break if the correction turns into an uptrend. While the coin poses immediate support of $112.36. Previous support and resistance levels were placed at $112.57 and $106.04.

The Parabolic SAR indicates that the coin is in a bearish zone, despite the recent uptrend, as the dotted lines are above the coin’s trend line.

The Awesome Oscillator further confirms the bearish swing as the AO line has dipped below 0.

The MACD line still shows that BCH was trading with bullish momentum but is now looking to get pushed into the bearish territory.

Bitcoin Cash has been going through relatively stable price changes since early-January with the only significant long-term downtrend arising due to the hardfork last year, which extended from $627.11 to $119.24.

The Bollinger Band shows a decline in volatility as the coin price change has been consistent. The Moving Average line points to a bearish market for Bitcoin Cash in the long-run.

The Chaikin Money Flow points to a mildly bearish swing, as investors are decreasingly pulling out their money from BCH, given that the CMF line is just below 0 and looking to incline upwards.

The Fisher Transform tool shows a bearish market, but since the two lines are inching closer, this points to a swing from the bears to the bulls.

Bitcoin Cash is recovering from a decline in the short-term, with the long-term price forecast indicating a stabilization spree for the coin. While the market has recovered and the coin has edged upwards, the bears are still holding on to the market, but major indicators point to a forthcoming switch to the bulls as the price moves up.