Over the past two months, Dash [DASH], the 15th largest cryptocurrency on the market has dashed ahead of both Bitcoin Cash [BCH] and Bitcoin SV [BSV] in terms of the sheer number of daily transactions.

Bitcoin Cash endured a hardfork in mid-November 2018, giving rise to Bitcoin SV which has, within a short period of time, solidified its place in the top-10. However, since the spilt, the two coins have been trading with bearish momentum, leading to a decrease in investor interest. 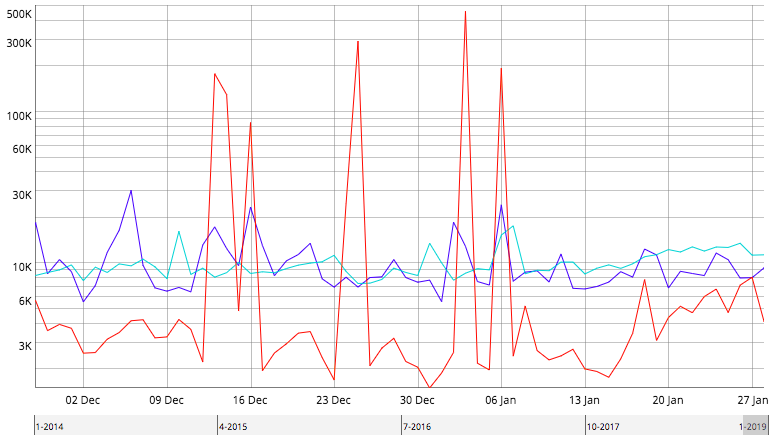 According to data cited by CoinMetrics, the transaction count for Dash has been consistently better than that of Bitcoin Cash and Bitcoin SV, noticeably in the recent few days. After the hardfork split Bitcoin Cash, the rival factions were marred in a hashwar, which significantly affected the transaction volume of the two coins.

From November 28 to January 28, Dash secured 64.5 percent of days with a higher network transaction count compared to Bitcoin Cash. The same was true with Bitcoin SV, however with an even higher margin of 88.7 percent of the day.

Bitcoin SV saw massive spikes in the days where its count shot up above Dash, likely due to stress tests for the fledgling cryptocurrency.

Transaction values between the three virtual currencies showed divergence as well. According to BitInfoCharts, the average transaction values of BCH and BSV were resoundingly higher than Dash, especially during the hardfork.

In terms of median transaction value, BCH and BSV saw variable movements, pulling significantly ahead of Dash on some days, and falling back on others.

From a long-term perspective, despite the differences in the transaction volume and value, Dash and Bitcoin Cash are hoping to usher in economic freedom through their respective cryptocurrencies. The same was discussed between Roger Ver from the BCH camp and Dash’s Joel Valenzuela.

The two discussed several important topics, like the ongoing bear market, Shapeshift’s layoffs and the differences between the BCH and the BSV camp. Ver stated that Bitcoin [BTC] has lost its track as the global decentralised peer-to-peer electronic currency for online payments and that Bitcoin Cash and Dash can change that.

“We like anything that works. BTC just stopped and clearly, it was time for other cryptocurrencies to step up. In a way, the communities of Dash and BCH are almost similar in the way that both believe in a fully functional payment system that is fast and trustworthy.”

The post Bitcoin Cash and Bitcoin SV fall behind Dash in terms of daily transaction volume appeared first on AMBCrypto.