Since the inception of cryptocurrencies and Bitcoin, many have come forward to claim that they were the anonymous creator of the digital gold, and till date, all the claims have more or less been proven wrong. Now, yet another person claiming to be Satoshi Nakamoto with no substantial proof whatsoever has surfaced in the cryptosphere.

The Twitterati, going by the name of the founder of Bitcoin [BTC], Satoshi Nakamoto, called Craig Wright, the self-proclaimed Satoshi, a liar on his blog post and further claimed to be the Bitcoin creator. 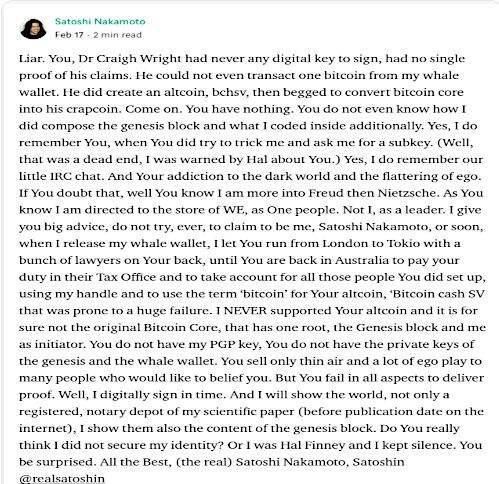 The latest claimant took to Twitter to make the accusation and commented on a post where Wright had said that he was ready to testify under oath claiming that he was the real Satoshi. The claimant said:

“I love it, if he does. Then I only need to use the #genesis #block to put him where he does belong, for all to see. #satoshin.”

Arguing that Craig Wright could not transact even one Bitcoin [BTC] from his whale wallet, he made another staunching claim that the chief executive of nChain tried to contact him multiple times. Earlier, the same person had also tweeted:

“Again. I am the #real #satoshi #nakamoto. Do not look to me as an #idol or #santa #claus. I am only the #initiator of the #project. Many did much more work in the #project then me. Do not look up to people, not down. But in the eyes. You are #special, #create with #joy. #satoshin”

At a time when the entire community echoes the same sentiment for all Satoshi impersonators to sign Nakamoto’s early keys, the new Satoshi in the block went one step ahead to solidify his claim. The individual had disclosed the PGP Key 0x5EC948A1 on his Twitter handle apart from asserting that he owns the digital key and will reveal the contents of the genesis block. Accessing the PGP key, revealed many interesting details.

The date October 30, 2008, on the key, was the day before the Bitcoin whitepaper was published and January 3, 2009, was when the genesis block was created. Additionally, a record called ‘revok’ dated May 2, 2016, under the name of the developer Wladimir J van der Laan, was also listed. This was exactly the same day when Gavin Anderson’s keys were revoked by Wladimir.

“All he has to do is move a specific amount of BTC out of Satoshi’s 1 M BTC wallet to another if he wants to prove it!”