The Bitcoin ecosystem has been continuously meddling around with rumors regarding the approval of Bitcoin ETF for the past year.  With the news which surfaced recently regarding the SEC initiation into research to develop a new tool to monitor risk, now an SEC Commissioner is predicting that a Bitcoin ETF will eventually get the approval.

The news has hit the crypto universe via a long interview discussion between SEC Commissioner Robert J Jackson Jr and Congressional Quarterly (CQ) which was scheduled to be published on February 11, 2019. However, a Twitter account holder named Drew Hinkes got hold of the interview draft, which was shared across the social media network. 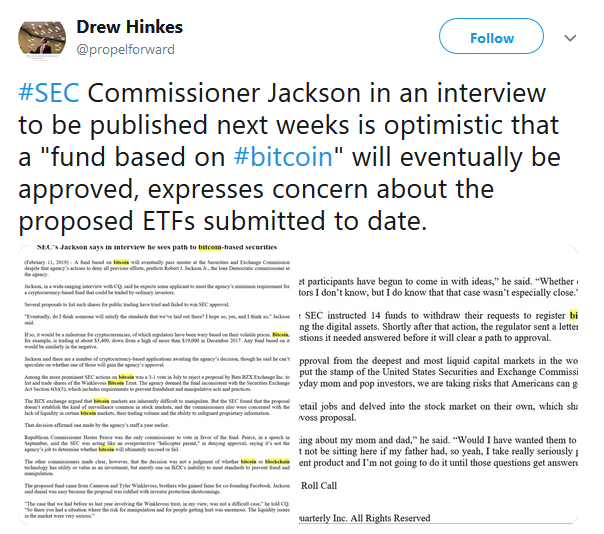 According to the interview, Robert J Jackson Jr, a lone Democratic Commissioner at the agency, said that several crypto-based ETF applications were up for consideration to get the SEC approval but it was not mentioned in the interview draft which specific application stands the highest chance of getting the particular approval.
He also stated:

“A fund based on bitcoin will eventually pass muster at the Securities and Exchange Commission despite that agency’s actions to deny all previous efforts.”

Today, a handful of other bitcoin ETFs continue to seek SEC approval. Last week, Cboe re-submitted the bitcoin ETF proposal from VanEck and SolidX. That ETF, initially proposed last summer, is seen as the most promising ETF in the industry. The deadline for approval was initially set in February. Due to the government shutdown, however, the ETF was re-submitted, pushing its deadline back until later this year.

Currently, a bunch of other bitcoin ETFs have continued to seek the highly desired approval. VanEck and SolidX combined proposal of the bitcoin ETF was submitted about a week ago through CBOE. The ETF was actually proposed last summer itself and the deadline for approval was set for February of 2019. However, due to the government shutdown, the deadline was pushed back and the ETF was re-submitted to the SEC.

Bitcoin ETFs are not a new form of proposition pushed forward as several ETF denials have occurred due to the SEC’s fears of market manipulation and unreliable price discovery in the industry. However, Bitcoin ETFs have started to fight the SEC’s consensus notion that Bitcoin markets can be manipulated. Jackson said in the interview:

“The BZX exchange argued that bitcoin markets are inherently difficult to manipulate. But the SEC found that the proposal doesn’t establish the kind of surveillance common in stock markets, and the commissioners also were concerned with the lack of liquidity in certain bitcoin markets, their trading volume and the ability to safeguard proprietary information.”