Bitcoin’s Lightning Network has been in the news over the past few months for its widespread adoption and implementation by a majority of mainstream players.

Since Bitcoin’s inception, the virtual currency has not really been able to facilitate widespread adoption due to its relatively high transaction fees and significant transaction time of 10 minutes per block. Due to these factors, many users and crypto-analysts had come to the conclusion that Bitcoin’s functionality as a widely accepted currency is irrelevant and that it will function better as a store of value.

This was one of the major reasons why the Lighting Network was developed; to act as a second-layer payment protocol designed to work on top of the Bitcoin[BTC] network. The Lightning Network was expected to bring answers and allow Bitcoin to solve its persisting scalability issues.

The implementation of the second-layer protocol was meant to enable transactions to be processed off-chain, both rapidly and with marginal fees. Now, according to recent reports from p2sh.info, the Lightning Network has experienced a staggering 830% increase in capacity over the past six months. 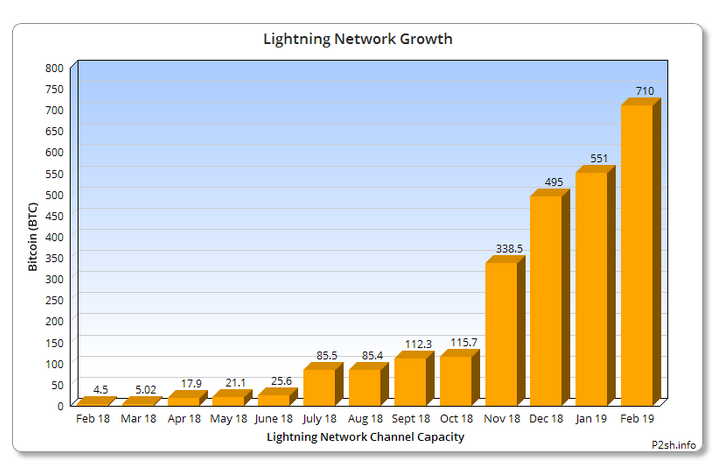 As it can be observed from the graph, the rate of increased capacity of the Lightning Network in terms of Bitcoins handled hiked staggeringly from being 112.3 BTC in October 2018 to 710 BTC, at press time.

The network capacity is currently at 710.13 BTC, which is a 28% hike and over the past 24 hours, around 937 new channels have been added to the network. The average transaction fee over the Lightning Network remained at 1 Satoshi.

The stats demonstrate Lightning Network’s huge growth and potential over time and indicate a rising rate of adoption by the network for faster and convenient transactions.

However, it is important to note that the Lightning Network protocol is still considered as ‘beta,’ despite witnessing significant support and applause from the Bitcoin community.