Bitcoin, the largest cryptocurrency in the world, is in the news lately due to the Lighting Torch experiment, which is promoting its Lightning Network. The CEO of Twitter and Square, Jack Dorsey, has once again come out in favor of Bitcoin and promoted the ‘digital gold’ on the social media platform. 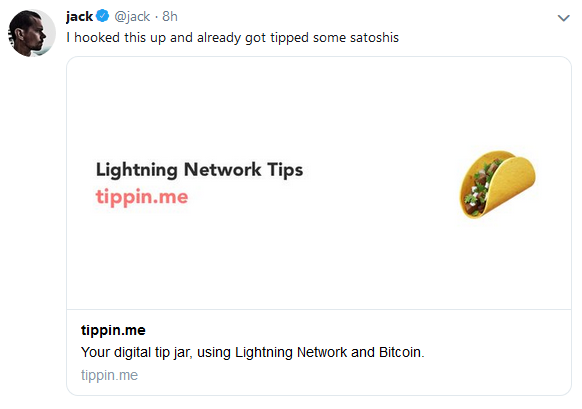 Jack Dorsey stated that he supported Tippin, a Sergio Abril-developed Chrome extension that allows Bitcoin holders on Twitter to send and receive tips over the social media platform using the Lightning Network [LN]. Once the extension is enabled, a small lightning bolt icon will appear on every tweet, next to the direct message, like, and retweet icons.

Jack Dorsey also conveyed his support to the Tippin app on social media and tweeted: 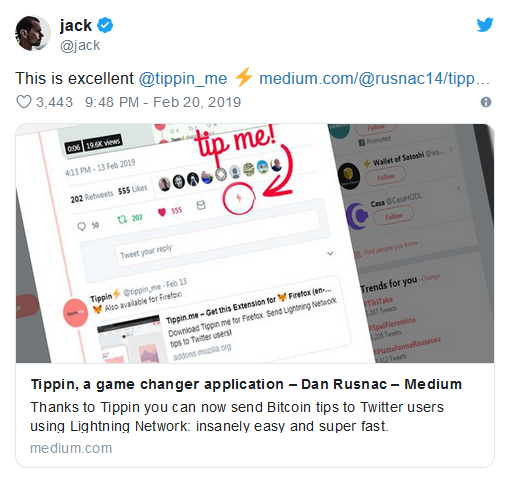 In a recent interview, Sergio Abril talked about the Tippin app and the main objective behind the creation of this extended feature on Twitter. He said:

“From the very beginning, I wanted Tippin to be an “easy-to-use” service; Lightning Network micro payments [or tips] made easy.  I didn’t want people to struggle with complex signup processes, so I went for a Twitter exclusive signup system.”

Sergio further spoke about the future of micropayments and said:

“Micro payments are finally possibility, and probably an alternative to advertising in some cases. Rewarding users for their content is really nice, and Twitter was a really good candidate for this. With that in mind, and making use of the fact that every Tippin user has the same username on Twitter.”

Sergio Abril added that the main objective behind the extension was to promote Lightning Network adoption and make users more favorable towards the sidechain transactions system. According to data available on 1ml.com, LN has 6,466 nodes, 28,718 channels and a network capacity of 708 BTC [$2.8 million]. The Lightning Network reduces BTC transaction time and fees and allows the whole Bitcoin network to scale.

This isn’t the first time Dorsey has lauded Bitcoin. He recently termed Bitcoin as the future native currency of the internet. He was also a participant in BTC’s Lightning Torch experiment.

The post Bitcoin [BTC]: Lightning Network-enabled Tippin extension gets a thumbs up from Jack Dorsey appeared first on AMBCrypto.