The number of Bitcoin nodes in China seems to have gone down considerably over the past week, recent data from Bitnodes seems to suggest. If so, this development would constitute another roadblock to the wider use of cryptocurrency throughout the world. However, there may be a very disturbing reason behind such a decline.

A bitcoin node is very critical to the basic functioning of the blockchain technology on which the cryptocurrency operates. It is essentially a ‘full client’ that shares blockchain and transaction data with others to form a network. Simply put, the more the number of nodes in a network, the more secure the network is likely to be.

There are, however, a few reasons for the falling numbers. For starters, unlike mining, running a full node doesn’t come with incentives. Despite the fact that running a node contributes to the coin’s decentralization, higher costs associated with electricity or network may dissuade those who are already running and those who want to. Further, collective mining pools have gradually weakened the consensual nature of mining and by extension, discouraged those who wished to provide nodes for the Bitcoin network.

Therefore, it would seem that there is a multitude of reasons associated with the falling number of nodes in China. However, this should ideally be no cause for worry as new nodes are cropping up elsewhere in the world, especially as the Lightning Network keeps scaling. 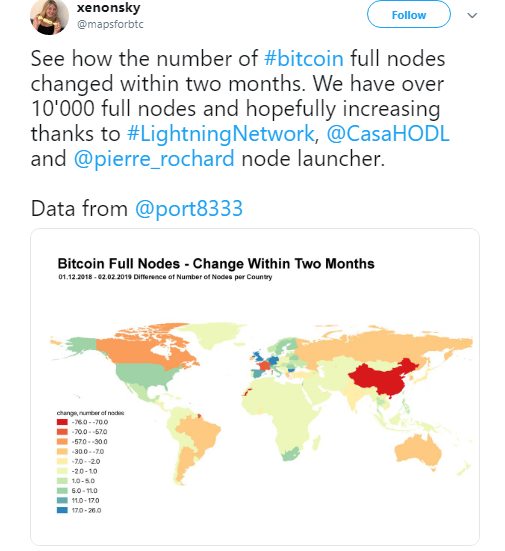