Samsung, the South Korean electronics giant has given a boost to the cryptocurrency industry by unveiling their new Galaxy S10. According to a leaked video, the smartphone has a feature for a cryptocurrency wallet with Bitcoin [BTC] and Ethereum [ETH] support.

On their official website, Samsung has mentioned that the new Galaxy S10 will support private keys for blockchain-enabled applications. However, the company has not confirmed if it includes cryptocurrencies as well.

“Security: Galaxy S10 is built with defence-grade Samsung Knox, as well as a secure storage backed by hardware, which houses your private keys for blockchain-enabled mobile services.”

Earlier in January, several Samsung insiders citing leaked pictures had revealed that the Galaxy S10 will feature a built-in crypto-wallet. The pictures suggested an option for users to set up their wallet, wherein they can import an existing wallet, allowing users to transfer cryptocurrencies from a previous wallet or create a new wallet.

Furthermore, the new Samsung device boasts an Exynos 9820 chip with PUF [Physical Unclonable Function] Technology meant to foster a unique identity for the microprocessor. Han Ho-hyeon, an IT expert stated that this chip would serve the device well if used to process a cryptocurrency wallet and increase the security of private keys.

Below is a snippet from the leaked video showing Ethereum support on the new Samsung device, 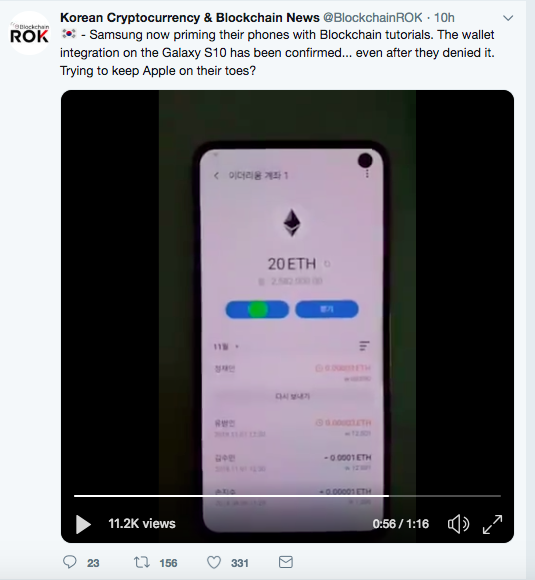 The “Crypto Phone” Finney was rolled out in December and was specifically geared towards cryptocurrency enthusiasts as it featured a cold-storage wallet, a decentralized application [DApp] center, token conversion services and a three-factor authentication protocol for enhanced security.

Made in collaboration with FIH Mobile and using IOTA’s Tangle technology, Finney was priced at a whopping $999 and even had Lionel Messi as their brand ambassador during their launch in Barcelona in November 2018.

The post Bitcoin [BTC] and Ethereum [ETH] wallet-support speculated to be available in the new Samsung device appeared first on AMBCrypto.