The BitTorrent [BTT] token public sale was conducted on January 28 and it not only resulted in huge success but also set a record time in which the coins were sold out. However, a certain glitch did not let many willful investors purchase the tokens. This problem was acknowledged by Tron founder and Chief Executive Officer, Justin Sun and suggested that Tron foundation, along with BitTorrent and Binance would initiate a small airdrop for those who could not get BTT. The CEO tweeted:

“I would like to explore the possibility with @binance to giveaway free $BTT to everyone on launchpad fails to get #BTT today. #BitTorrent community wants you! Not 100% guarantee. Need to figure out detail. BUT RT if you agree! @cz_binance #TRON $BNB $TRX”.

As per the Chief Executive Officer of Binance, Changpeng Zhao or famously known as CZ, all order requests for the purchase of the BTT token on the Binance launchpad have been preserved. This meant that the Binance teams had the records of all the people who attempted to participate in the sale of token but were unable to make the purchase due to some technical glitch due to high volumes of demand. CZ tweeted:

“Order of requests was preserved. It should have finished in a few seconds (far less than 18s actually), the server glitch just delayed the results. So, no need to redo. We should have set the upper limit lower so that more can get some. Mislead by all the “bear” cries…”

However, Justin Sun has confirmed the completion of the exploration of giving away token to those whose orders were not processed and said:

“We have done all the job. Will announce the giveaway soon. #TRON #TRX #BitTorrent #BTT $TRX $BTT”.

Hours after the tweet, Sun announced the completion airdropping 5,000 BTT to the users and wrote:

“#BitTorrent (#BTT) has completed an airdrop of 5,000 $BTT to all users that were eligible but unsuccessful in purchasing BTT on @binance Launchpad. #TRON #TRX $TRX”

Binance also took it upon themselves and announced the completion of the sale of BTT token on January 28 and the airdrop of 5,000 BTT. 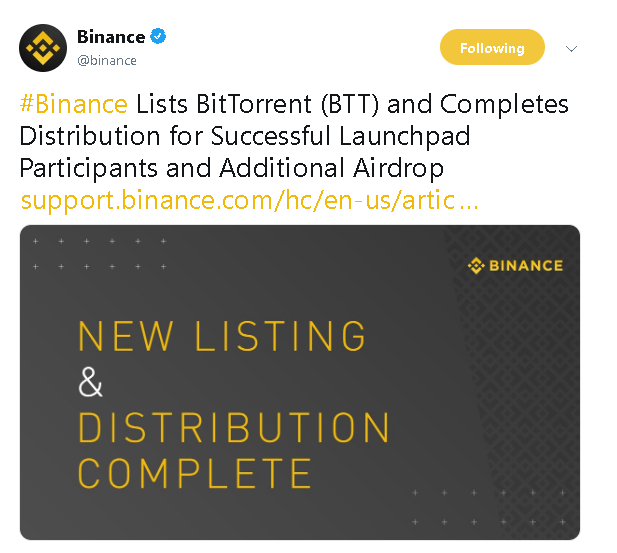