Tron [TRX]’s march towards mainstream adoption has been fueled by multiple listings as well as partnerships across the spectrum. Some speculate that these events have changed the tide in the Justin Sun led cryptocurrency’s favor, currently holding the position of the biggest gainer among the top 10 cryptocurrency club.

At the time of writing, Tron was gaining at a significant rate of 11.07% with a total market cap of $1.506 billion. The cryptocurrency was trading for $0.022 with a 24-hour market volume of $203.647 million. The lion’s share of the trade volume was held by Bit-Z overseeing a quarter of the total TRX trade. 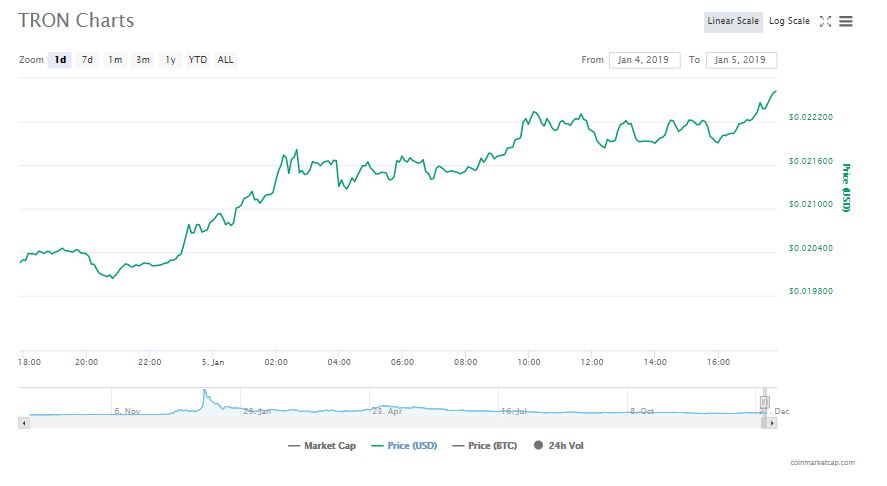 This amounted to over $54.751 million worth of Tron transactions. Bit-Z was followed by Changpeng Zhao led Binance, which had a grasp on 11.19% of the entire TRX trade.

The current surge has also resulted in Tron trading at its highest point in over two weeks. A lot of people speculate that Tron’s rise happened due to Tron’s acquisition, BitTorrent, launching its own token. The new token is stated to run on the Tron protocol which will be issued by the BitTorrent Foundation. Post this event, Tron CEO Justin Sun had tweeted:

“Excited to unveil our new token BitTorrent $BTT and its crowdfunding on #BinanceLaunchpad!! The @BitTorrent token is the first of many steps towards achieving mass adoption of a truly decentralized internet. Come to #niTROn2019 for more info

The move was also appreciated by Binance CEO Changpeng Zhao as well who said:

“Entrepreneurs are the building blocks of industries. Let’s support them in doing their tough jobs!”

Tron was also in the news recently due to a proposal put forth by Tron One, a Super Representative of the Tron ecosystem. The proposal was aimed to allow businesses to release a crypto token the same name as the brand name. The Foundation announced: