It’s no secret that most hedge funds have had a particularly difficult year, and now that we have 11 months of data, it’s become clear that 2018 is the industry’s worse year since the global financial crisis. Between investor redemptions and performance-based losses, the hedge fund industry has shed 3.4% of its assets under management so far year to date, according to data from Eurekahedge.

More of the same in November

The publication reports that assets under management by the world’s hedge fund industry are down to $2.36 trillion. The 3.4% year-to-date decline in AUM for the first 11 months of the year makes 2018 the worst year for the hedge fund industry since the global financial crisis, Eurekahedge said. Interestingly and perhaps unsurprisingly, last year was the best year for hedge funds since 2013.

The Eurekahedge Hedge Fund Index is down 2.36% year to date through the end of November, compared t the 8.45% gain recorded in the first 11 months of last year.

The worst year for long/ short equity funds since the crisis

Almost every major hedge fund strategy was pushed into the red in February due to the broad selloff, although CTA/ managed futures funds recorded the biggest losses with a 4.12% decline in that month alone. The strategy’s performance-based losses reached $22.6 billion in February.

While October’s selloff was similar in magnitude to February’s, long/ short equity funds took the biggest hit this time around, running against the signs they were bouncing back a few months ago. The Eurekahedge Long Short Equities Hedge Fund Index was down 3.63% in October, bringing its total year-to-date return into the red for the first time this year. About 80% of long/ short equity funds recorded losses in October, bringing the strategic mandate’s total performance-based losses to $29.1 billion.

In addition to this year being the worst for the hedge fund industry as a whole in terms of shrinkage in assets under management, this year was also the worst for long/ short equity funds in terms of performance-based losses. Long/ short funds racked up $29.1 billion in performance-driven losses, which is the steepest decline since the 2008 financial crisis. Investor redemptions from long/ short equity funds stood at $13.2 billion in October.

Although November was a much stronger month for the financial markets, most hedge funds failed to capitalize on the upward movement while trying to recover from October’s steep losses. Last month just 24.3% of the hedge fund managers tracked by Eurekahedge were able to beat the global equity market. The Eurekahedge Hedge Fund Index was down 0.14% for November, compared to the MSCI AC World Index’s gain of 1.11% during the month.

North American hedge fund managers did better than those in other parts of the world. They were up 0.48%, recovering just a very small amount of the losses racked up the month before. The S&P 500 gained 1.79% last month, assisted by a dovish Fed and optimistic views of the G20 meeting. 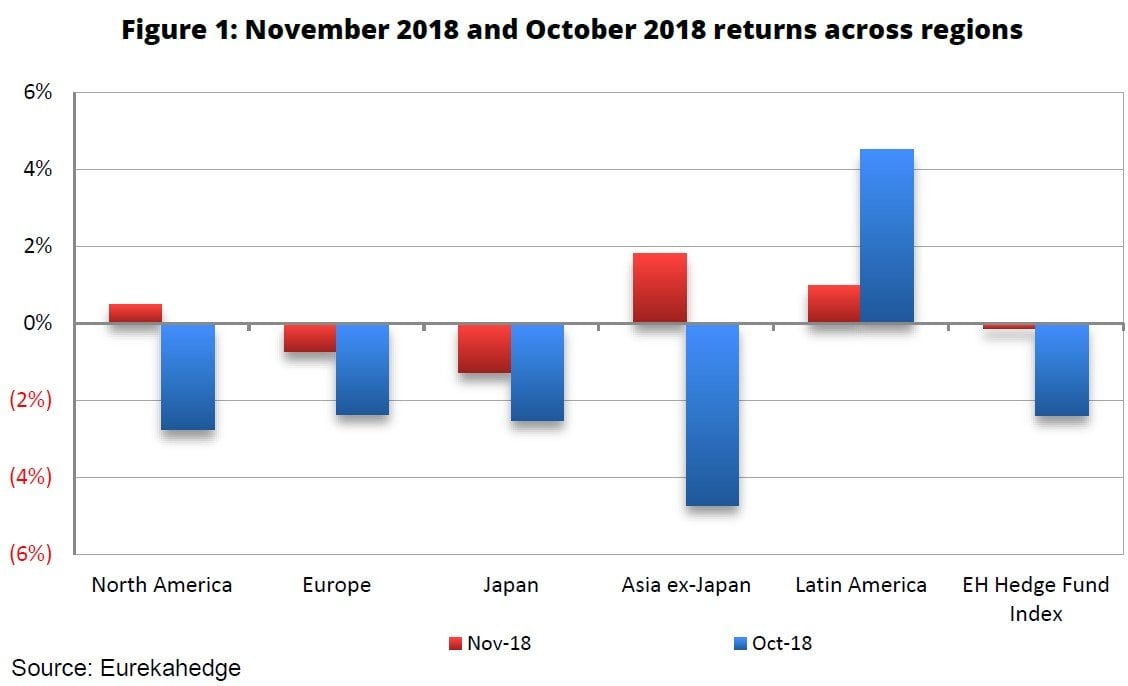 In October, the Eurekahedge North American Hedge Fund Index saw its worst performance since the financial crisis with a 2.76% decline. Despite the steep decline in October, North American funds were still in the green year to date through November. However, October wiped out a large portion of the gains enjoyed in the first nine months of the year, bringing North American funds to a gain of 0.87% for the first 11 months.

The post This Is The Worst Year For Hedge Funds Since The Financial Crisis appeared first on ValueWalk.