When major investors like hedge funds and public pensions stampede in any one direction, it sends major ripple effects through the financial markets. History tells us that in many cases, such stampedes have served as signals or warnings about what’s right around the corner. A recent report highlighted on a couple of interesting trends involving hedge funds and pensions, and historically, similar trends have signaled a rough ride in the near future.

In a report released in the end of December, Deutsche Bank analyst Masao Muraki and team identified several signals observed in 2018 and explained what they could mean for 2019. Specifically, they warned investors to prepare for a “critical” phase of the credit cycle, pointing out that 2018 finally brought a deviation from the Goldilocks market of 2017.

The DB team noted that liquidity is declining, which is pressuring several segments of the financial market. One factor related to this falling liquidity is the growing number of hedge fund redemptions.

Redemptions have been rising steadily as investors increasingly prefer passive funds over actively-managed ones. Hedge fund redemptions came to a head in October, based on data from multiple sources, but they’ve only gotten worse since then. The DB team noted that noted that several factors have made it difficult for hedge funds to produce strong returns.

“The sustained high level of volatility has worsened the profitability of consensus trades based on market momentum, and the fall-off in market liquidity has generally hurt their performance as well,” they wrote.

Other sources have indicated that 2018 was the worst year for hedge fund returns in a decade, which is also jarring because it also brings us back to the Financial Crisis.

As hedge funds struggled to post positive returns, there was a high degree of position unwinding, which caused a domino effect by adversely impacting the performances of other hedge funds which held similar positions. The DB team warned that this widespread position unwinding among hedge funds ended up being a bad omen in years past.

“We recall that the unwinding of quant funds in August 2007 and macro funds in October 2015 were harbingers of subsequent market turbulence,” they explained.

In other words, when investors abandon hedge funds en masse like they have done within the last several months, it forces these funds to unwind some sizeable positions. As numerous hedge funds unwind popular positions, they end up indirectly tanking the returns of other hedge funds with similar portfolios, which only exacerbates an already-worsening situation further.

In short, there’s an investor stampede out of hedge funds, followed by extreme market turbulence caused by those hedge funds being forced to unwind positions. And when this happened in 2007, the Global Financial Crisis followed close behind.

The DB team also called attention to a signal from pension funds which has also tended to be an ominous portent of what’s to come. They explained that since the Global Financial Crisis, defined benefit pensions, some life insurance providers, and “retail investors facing a shortage of assets to cover their retirement cost liabilities” have been pouring capital into the corporate credit markets, both in the U.S. and in emerging markets.

They highlighted the funding ratio of defined benefit pension plans in the U.S., showing what happened to it at different points of the credit cycle. 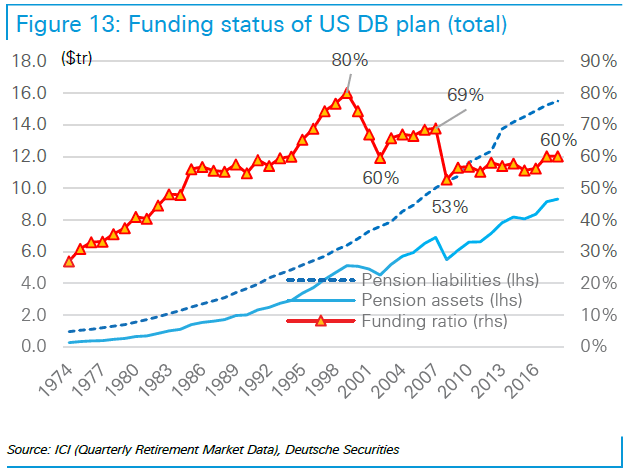 According to the Deutsche Bank team, when the funding ratio of defined benefit pensions falls after bull markets collapse or bubbles popped, there tends to be an increase in “excessive risk-taking,” even among pension funds.

The analysts estimate that about two-thirds of the $9 trillion held in defined benefit plans in the U.S. is in public pensions with a target investment yield of more than 7%, which is a serious problem with the 10-year Treasury yield is a mere 2.7%. They also point out that public pensions have a very difficult time reducing benefits (consider the growing number of lawsuits against those which have tried) or increasing contributions (for obvious reasons).

In order to meet their high target yield, many pension plans have been taking extreme risks, and this trend has been observed more often in recent years. Because pension funds are so limited, a competition for the capital they provide can be intense.

“Some hedge funds engaged in volatility short, credit (put) short and natural disaster (insurance) short may be affected by the competition to acquire pension fund money,” the DB team explained.

More recently, pension funds have been flocking to credit, according to other sources, which again brings us back to Deutsche Bank’s concerns about the current credit cycle.

Muraki and team admit that even though these signals from hedge funds and pension funds have been bad omens in the past, it doesn’t necessarily mean that 2019 will be a difficult year for volatility. If 2018 has taught us anything, it’s that there are always exceptions to the rules, as many hedge fund managers pointed out early in the year.

Thus, the DB team also took time to suggest other possibilities if the signals they identified turn out to be exceptions. For example, if interest rates remain low, they think it’s possible the Goldilocks market of 2017 will reappear, and we did see a hint of this on Friday. Investors were so pleased with the Fed’s latest commentary around interest rates and the latest jobs report that the market saw tech favorites like Facebook, Apple, Amazon, Alphabet and even Tesla bounce back. However, that was just a single day of trading, so it’s far too early to know if that’s a return to the previous trend or just a temporary blip.

They also noted that the current ratio of corporate debt to GDP is at a record high, which could mean a minor “earthquake” in the markets which isn’t as severe as the one suggested by the trends they observed in hedge funds and pensions. They cited the default rates for high-yield corporate bonds in 1990-91, 2001-02, and 2008-09 as potential signals of this occurrence.

The post These Two Investor Stampedes Are Eerily Similar To Pre-Crisis Events appeared first on ValueWalk.