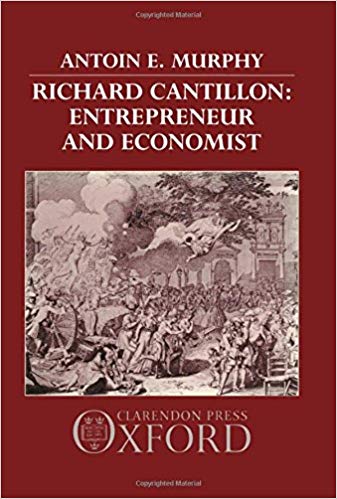 Welcome to the medical daily weekly commentary. I’m Cuban Orrick along with David McAlvany we have a guest today Dave here and that reminds me of what Alex Paula could guess that we had about six weeks ago brought up to us that the financial world really doesn’t study economic history. And when he would go talk to some of the bigwigs in the financial world and in the banking world he was amazed that they really didn’t know anything about financial history.

Reading through his biographies that Anton Murphy has written on Richard Cantillon and John Law I would say that Antoin Murphy is one of my favorite economic professors. I haven’t sat with him in class but I can tell you that the reason I’m excited about listening to and engaging in conversation with Professor Murphy today is because he’s the kind of professor that I would have wanted in my economics class.

Well you know he’s a biographer at heart he understands the human behind the economics and you know if you remember when we interviewed Adam Fergerson who wrote a book about the collapse of the German system back in the 1920s. What we loved about his book The Death of Money was that it didn’t come at it from a mathematical point of view. He brought it to the human perspective which let’s face it they were humans first.

In that sense Deirdre McCloskey does the same thing where you have a certain approach to economics which is less common today but is of equal or greater value as it becomes scarcer and scarcer.

We live in a day and age where we talk a lot about John Maynard Keynes. OK we talk also about Milton Friedman and we talk about some of the what we call the new economists as if these were new ideas but when we were talking the other night about John Law and his sometimes partner Richard Cantle on we realized that John Law was the first.

John Maynard Keynes 300 years ago as Richard cattle and to some degree was a monetarist. Milton Friedman Well as we launch into our conversation today with Antoin Murphy There are three things that stand out from the biography on Richard Cantillon which he wrote in 1986. The first was that unconventional monetary policy is not new. It’s something that we have seen going back several hundred years and still have today. We just have a new vocabulary for it today. The second thing that stood out was the role of money and credit which has always been central to bubble dynamics and always necessary to continue to push prices of assets higher and higher. And I think the third thing that stood out to me is that Shakespeare suggested and I think Cantillon life reflects this that the past is prologue. Professor Murphy several of your interests as an academic in the field of economics deal with the history of monetary thought with monetary economics and with macro economics as a whole and you’ve written a number of books highlighting the stories of John Law and then of Richard Cantillon as well and many of our listeners will know John laugh from the story of the Mississippi Bubble of 1720.

I think fewer will know the name of Richard Cantillon and I think fewer knew about him prior to your biography but he’s certainly no less important law was from Scotland. Cantillon from Ireland and they both found themselves in Paris France and would talk about them more in a moment. You’ve moved from Trinity College Dublin to the Centre for International Affairs at Harvard. To then the West Coast to teach a seminar in economics there at Stanford University along with time at the Hoover Institute. I’m sure there’s more we could add to your biography to make it exhaustive. But now by coincidence we find another Irishman in France who were curious in your retirement. Are you trading wine. Are you banking or are you speculating on the Paris exchange. Tell us tell us why you’re there and tell us how Cantillon emerged as that banking figure in Paris from his youth.

The post The Biggest Bubble In The 18th Century & The Man Who Got Out In Time appeared first on ValueWalk.