Singapore-headquartered digital asset exchange, Huobi Derivative Market, on January 25, launched the contract trading of the seventh-largest cryptocurrency, Litecoin [LTC], on its platform. The launch was announced on Huobi’s official Twitter handle. With the implementation of the contract with the leading crypto exchange, LTC will become the fourth digital asset to be registered, along with Bitcoin [BTC], Ethereum [ETH] and EOS, enabling Huobi users to trade the digital currency for the first time on its exchange. 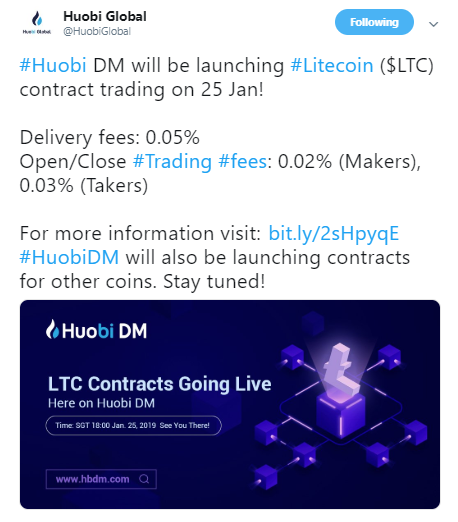 After the latest development of Huobi launching Litecoin [LTC] contracts on its Derivative Market, prices of the LTC coins have witnessed a sharp soar. At the time of writing this, the coin held a market cap of $1.95 billion, valued at $32.53. The trading volume was recorded at $36.6 million with an increase of 1.76%. The trading on the Huobi platform has also spiraled upward and have reportedly reached $10 billion in a couple of days. The exchange was also reported to have more than 1.5 million users trading on its platform.

Huobi Global is the ninth-largest exchange dealing with the cryptocurrency according to the CoinMarketCap.

Following the latest contract, in a statement, the CEO of Huobi Global Livio Weng said, “Litecoin is one of the biggest of the altcoins on the market today and we’ve seen quite a bit of demand for it by our users.” He further announced the launch of other altcoins, “We’ll be adding more coin types to the platform as 2019 progresses, with Ripple [XRP] next on our list.”

Incepted in the year 2013, Huobi Global has rebranded from HUBUS Holdco.Inc after expanding its base in the US and receiving exclusive rights to use the US brand called Huobi, earlier this year. Apart from the US and China, Huobi has managed to scale up and has expanded its global footprint globally across Australia, South Korea, and Japan, the last being the most recent country to have acquired the license to initiate the operation. In August 2018, the crypto exchange evolved into a publicly listed Hong Kong company.

The post Litecoin [LTC] contracts launched on Huobi Derivative Market, XRP next to make a foray into the exchange appeared first on AMBCrypto.