In an announcement on Twitter, the cryptocurrency exchange WazirX announced that it had completed P2P trades with a net value of Rs. 100 crores on its trading platform. The announcement was made by Founder and CEO of WazirX Nischal Shetty via Twitter.

The announcement comes as welcome news for India’s beleaguered cryptocurrency market and traders as well as an exchange that had posted a total trade volume of Rs. 60 crores in the month of December. 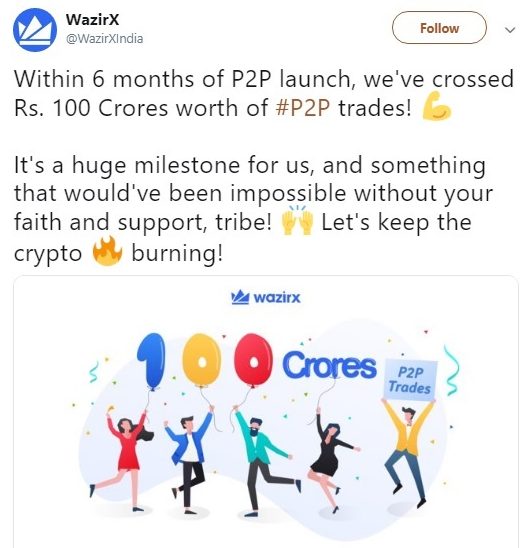 The growing worth of WazirX is perhaps symbolic of the growing number of people in India who are participating in cryptocurrency trades, despite the strict regulatory environment in place at this moment. Back in December when WazirX had also posted a significant jump in trade volume, CEO Nischal Shetty had said:

“The recent uptick in the crypto prices has gotten a lot of Indians trading again … whenever there’s volatility people forget the problems and start trading. That’s exactly the reason why we’re seeing our volumes shooting up so fast.”

WazirX’s success offers hope to many exchanges and traders across India who were hit significantly by the Reserve Bank of India’s [RBI] decision to ban financial institutions such as banks from facilitating services to entities or individuals engaged in cryptocurrency trading services. Such issues have been given innovative solutions to by exchanges such as WazirX and Unocoin with the P2P trading facilities.

Presently, the Supreme Court is yet to hear several petitions filed against the said RBI circular and exchanges such as WazirX remain at the fore of such a campaign to allow the wider trade of cryptocurrencies in India.