The new year seems to be the bearer of the good times as Bitcoin [BTC] and other cryptocurrencies have started to regain their status in the market. The uptrend that started in the month of December 2018 continues to push the market ahead. The sideways trading 2019 crypto markets pumped in the last 15 minutes before press time with everything from Bitcoin to other coins flashing green.

With the final announcement for Bitcoin for the year of 2018 made by the biggest institutional player, Intercontinental Exchange’s Bakkt, the coin is currently witnessing a massive push in terms of price. The coin has jumped from trading below the $4000 mark to above the said mark within a matter of minutes.

The one-hour jump pumping everything from Bitcoin, Ethereum, XRP and other altcoins 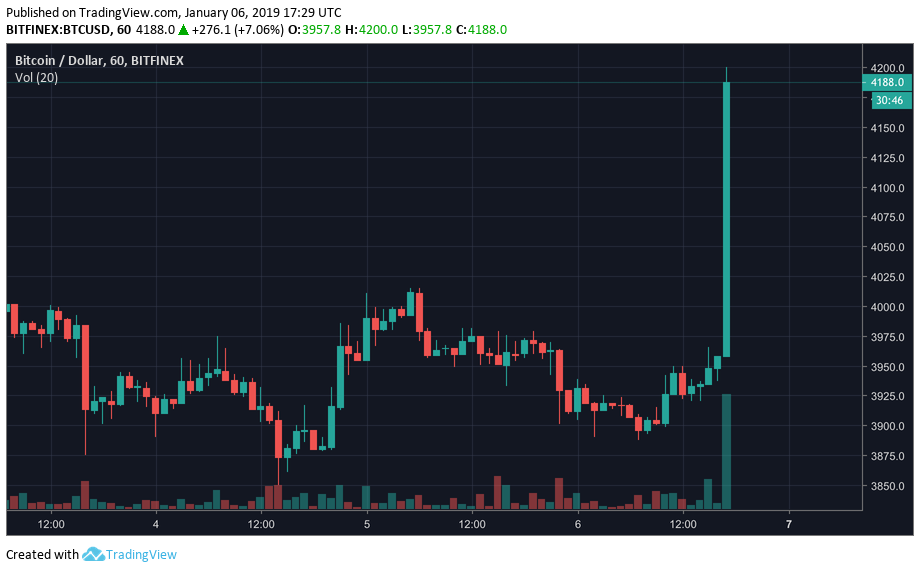 According to CoinMarketCap, at press time, Bitcoin was trading at $4085 with a market cap of $71.3 billion. The trading volume for the coin is recorded to be at $5.39 billion and has surged by over 5% in the past one hour.

The highest trading volume is recorded on BitMEX with BTC/USD pairs. The second highest volume is pouring in from Coinbene with BTC/USDT pairs.

Additionally, Bitcoin is not the only coin to benefit from the flash hike. Other top currencies have also hopped onto the bandwagon. This includes Ethereum [ETH], Litecoin [LTC], and Tron [TRX]. Even XRP, the third biggest cryptocurrency has started to rise slowly.

Ethereum was trading at $159.55 with a market cap of $16.61 billion. The cryptocurrency with a trading volume of $3.15 billion has seen a hike of more than 14% in the past seven days, with the important news of the upcoming hard fork, Constantinople scheduled to take place around January 16, 2019.

Whereas XRP, the coin that surpassed Ethereum to take over its second position several times, jumped to its highest value for the day, $0.389 after several days. The coin has a market cap of $15.04 billion with a trading volume of $482.74 million and has seen hike by over 3% in the past one hour.

“Time to move away from margin trading and back to shit coin trading I guess. The manipulation of bitcoin price is at an all time high right now with such low volume. Kind of ridiculous.”

Jonno12321, a Redditor stated the reason for this hike as:

“Yeah bitcoin is still far below its value. It’s just had a lot of downward momentum for the last year that’s pushed it to what is now a bargain price, people are still uncertain, but now they are starting to come back.”