The cryptocurrency market had a good start for 2019 and has now started bleeding without any sign of relief, with huge red candles for all cryptocurrencies, including Bitcoin [BTC], XRP and others.

Bitcoin was showing good signs of an uptrend after a very long time, but has now dropped down below the $4,000-line, which was being held up steadily for the past few days.

The price of Bitcoin in the one-hour chart has fallen from $4,024 to $3,809 and has still not stopped falling. The major volume for BTC is coming from the exchange, BitMEX, and it contributes a whopping 15%, which is $1 billion, via the trading pair BTC/USD

The market cap of BTC has dropped below $70 billion line and is currently at $68 billion with 24-hour trade volume coming down to $5.6 billion.

The second candle for BTC, which opened at $3,847, is constantly sliding down the rabbit hole with no signs of stopping. The candles are yet to close as the massacre continues. 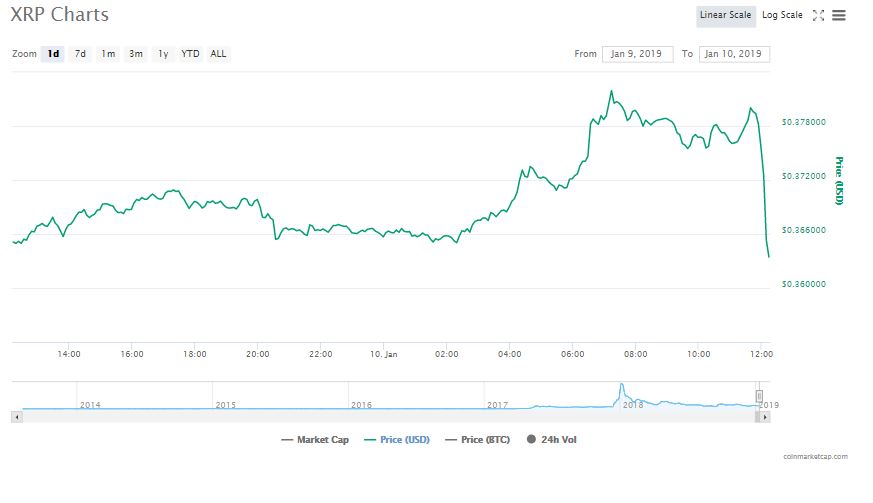 As for XRP, the second-largest cryptocurrency in the world, has also suffered the same fate, where the prices dropped from $0.38 to as low as $0.35, which is a massive reduction of 11% within an hour.

The bears have taken the reins back from the bulls and are on a rampage to crash the markets. However, this news for XRP has turned out to be good in a way as XRP has regained its second position back and pushed Ethereum back to the third spot.

The total trading volume for XRP is at $635 million and a majority was contributed by  ZB.com, with trading pairs XRP/BTC.

The post Flash Crash: Bitcoin [BTC] plunges below $3,800 support; XRP crumbles under pressure of the bear appeared first on AMBCrypto.