Tone Vays, a well-known person in the cryptocurrency space and an analyst, explained how the chances of Ripple being involved in the future of payments is 0.0001%.

Crypto-community is very attached to their coins and would go to lengths to argue and defend them. Many wars have erupted involving prominent people in the crypto-space on Twitter.

Jason Silbert posted a tweet about his podcast with Tone Vays and David Silver on the 10th anniversary of Bitcoin’s Genesis Block i.e., January 3, 2019. A Twitter user Matt Hamilton commented:

“Jason, just listened to this. I totally agree with you that in 10 years, people are not going to care what crypto is used under the hood to make the transfer. The irony being, that there is a good chance that in 10 years, that payment you made your son could involve Ripple.”

“Very strong chance.. and you wouldn’t know it used XRP to begin with”

The above argument seems valid to many people as XRP and Ripple have taken the cryptocurrency space and the payments [remmitance industry] by storm with their services like xCurrent, xRapid, and xVia.

Tone Vays stepped in at this point and commented:

“No it won’t, and the chances of it being another Crypto like ETH, LTC or XMR are not 0 like Ripple but a tiny fraction above 0, let’s call it a 0.0001% chance. But feel free to lose all your money on this expectation.”

crypto_hodler rebutted with some cliched Bitcoin problems that are less relevant in the present scenario. He commented:

“Ok.. curious what you expect the percentage possibility BTC would be more likely? Albeit slower, more costly, and nowhere near as scaleable? Or am I missing something – please enlighten me.. will appreciate – thanks” 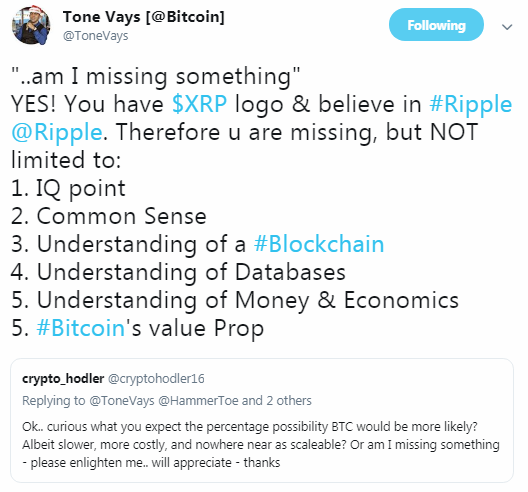 Other people stepped in to defend Bitcoin, one user, Rob commented:

“You do understand that XRP’s total supply of 100b coins is nearly 4,800x the 21mm of BTC that will ever exist, right? And 60+% or XRP is owned by the Ripple team. It’s a centralized, one-use, trash coin. Lightning Network will eventually solve BTC’s current scalability issues.”

“Have you heard about Lightning Network? It’s definitely not slow and expensive. Try it!”

The post Expectations in Ripple and XRP to become a payment processor will lead to loss of investment, says Bitcoin [BTC] influencer appeared first on AMBCrypto.