Google, the biggest search engine platform in the world, has taken yet another strike at the cryptocurrency community. The tech giant is in the limelight for a rather uncanny step taken against one single project in the space.

Decenter, a Blockchain solutions, and decentralized application firm, announced on Reddit that Google has blacklisted ads pertaining to Ethereum [ETH], the third-largest cryptocurrency by market cap, and a leading smart contracts platform.

This was mainly due to concerns over deceiving users into investing in fraudulent ICOs through advertisements. The tech giant was also in the limelight when they put a halt to cryptocurrency mining extensions/apps on Google Play and Chrome.

This was soon followed with Google releasing another statement in regards to the cryptocurrency advertisements in the month of September 2018. Here, Google announced that they have updated their stance on the ban, adding that cryptocurrency exchanges can buy advertisements within the regions of the United States and Japan. Additionally, the tech firm had made headlines in the Ethereum community when Vitalik Buterin, the co-founder of Ethereum, posted a picture on Twitter, wherein an official from Google approached him with a job offer.

“Google has various political and economic agendas, and they are quite willing to use their various services to promote their preferences. AdSense and Youtube are notorious for this, but there have been some incidents regarding the play store as well. Despite their supposed corporate “do no evil” motto, they are more than willing to use their considerable power to choose winners and losers in social, political, and economic matters.”

This time around, the biggest internet player is placed in the spotlight as accusation raise that the firm has blacklisted that have the keyword ‘Ethereum’. Decenter said on Reddit:

“We’ve been using Google Ads for the past 6 months to help us get more visibility for our smart contract auditing services and we’ve noticed a strange change in the last few days. It seems that Google completely blacklisted Ethereum as a keyword. Any of the keywords that contain “ethereum” in our campaigns are no longer showing ads as of January 9th and are now reporting the following error:” 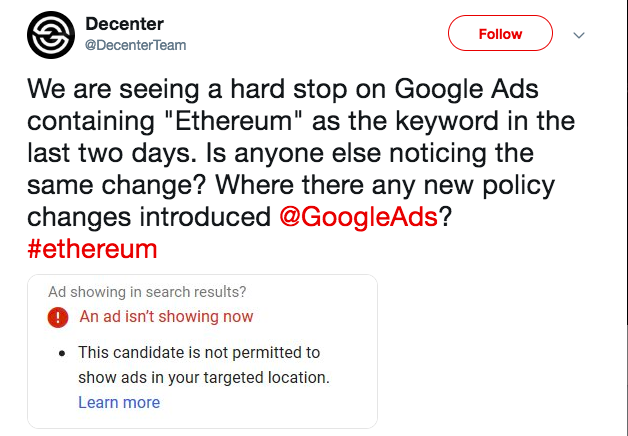 The team also stated that Google Ads team claim that there have not been any changes to their cryptocurrency advertisement policy. Despite the claims made by the tech giant, ads related to Ethereum are not being displayed on the search engine platform since January 8, 2019, Decenter added.

“We are concerned that Google is targeting Ethereum specifically for some reason and wanted to see if we as a community could put some pressure on the Google Ads team to adjust their keyword policy or to at least provide a reasonable explanation for such discriminatory regulations.”