Cryptocurrencies – money of the future. Bitcoin and cryptocurrencies promised a lot of things and along with those promises came the problems that we would never have faced if we stuck to the fiat system. But then again the world isn’t all black and white.

As promising and strong cryptocurrencies sound, they aren’t almighty and invulnerable, they do have drawbacks like the one that has taken Ethereum Classic [ETC] down temporarily.

Satoshi Nakamoto envisioned how Bitcoin network, which makes use of Proof-of-Work [PoW], could be attacked in his whitepaper. Nakamoto stated:

“If a greedy attacker is able to assemble more CPU power than all the honest nodes, he would have to choose between using it to defraud people by stealing back his payments, or using it to generate new coins.”

Assembling of CPU power came to be known as a “51% attack”, i.e., if a person/organization amassed more than 50% of the total hash power that is being used to mine a particular coin, then that coin could be controlled by the said person.

The person could go back and change the history in the blocks, rewrite transactions, generate more coins, add more blocks to it. This attack is the major drawback of PoW and sometimes referred to as “security risk” or “attack vector”.

Ethereum Classic [ETC], a fork of Ethereum which took place in July 2016, has been the victim of the aforementioned and its blockchain has been “reorged”. Reorged is a short-form of “chain reorganization” in which a person with enough hash power takes control of the blockchain and goes back to the block of his liking and extends an alternative block history as per his liking.

The 51% attack was reported by Coinbase on January 7, 2019, but a few people on Twitter had already whiffed out the 51% attack rumors.

“Was there a deep reorg on Ethereum Classic yesterday?… 75 blocks deep I hear, with a doublespend”

“Well ETC is still small and has many enemies so an attack with sufficient GPU power may be plausible, but I will check with others in the ecosystem.”

The devs realized that there was an attack and as per the blog by Coinbase, a total of 219,500 ETC worth a whopping $1.1 million was double spent.

51% attacks are not very uncommon; they keep happening from time to time on smaller blockchains that are still nascent and are under development.

The reasons that could summarize why ETC faced this 51% attack could be:

Charlie Lee suggested a possible workaround for this problem that ETC is facing in a tweet. He said:

“Be careful w/coins that are not dominant in their respective mining algorithm, especially ones that are NiceHash-able. ETC has less than 5% of the total Ethash hashrate and is 98% NiceHash-able. 1-hr attack costs $5k. Almost $500k has been double spent”

“I think that continuing to build the stack as planned (a secure PoW base layer, with layer 2 sidechains, plus developer tools, continuous efficiency gains and adding of new features in the long term) will get ETC closer to the long term vision of a blockchain perfectly suitable for secure decentralized computing.”

“With the above in mind I think the best path is to explore a mining algorithm change to put ETC in a unique, incompatible PoW niche. Even if that implies a tradeoff as miners will have less optionality to point their infrastructure to different chains depending on the profitability of the day.”

A Twitter user @_itsanhonour tweeted suggesting that the ETC’s 51% attack was some sort of a conspiracy theory as OKEx exchange is the largest source of volume ETC. 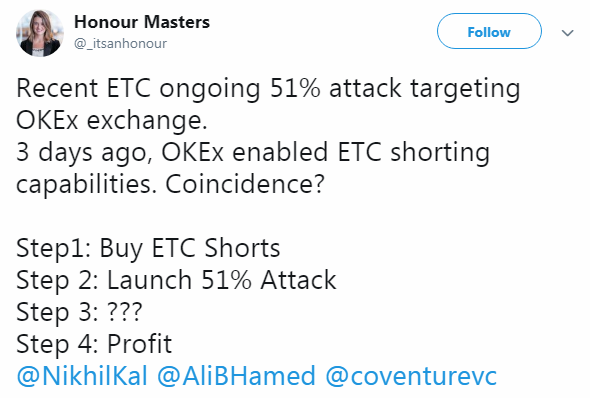 Peter Todd, a well-known person in the crypto-community, tweeted: 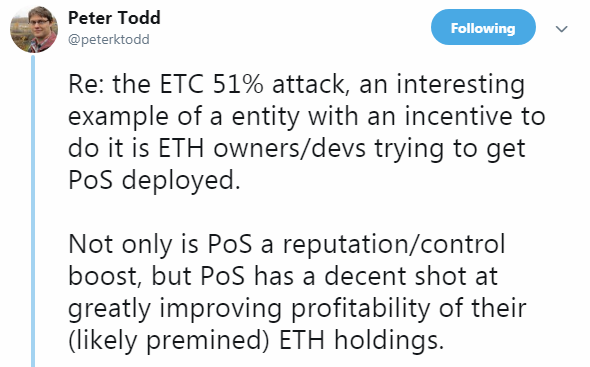 To the above tweet, a user @Cryptojack2 suggested that Vitalik Buterin, the creator of Ethereum organized the attack. He commented:

“yep, makes perf sense- not because it is the true defin of SHITCOIN- no devs,hugely inflated MC,no real usage(besides being “immutable”-ROFL & working on the “one and only consensus-POW”).It is the evil lord @VitalikButerin , that organised the attack…”

Summing it all up

This is not the first time Ethereum Classic has been under the eye of media. Ethereum Classic was supposedly used by Barry Silbert as a classic “pump and dump” scheme back in 2016/2017. Moreover, Silbert allegedly used insider information to accumulate more ETC before it was listed on an exchange that he owned, Kraken.

So far, the reports by Coinbase claim that a total of $1.1 million worth of ETC was double spent and it was even confirmed by the devs.

Like, Coinbase, exchanges including Poloniex, OKEx, and many others, have decided to block the sell and withdrawal for Ethereum Classic until further notice.

The prices of ETC as a result of this attack has slipped by 7% and have halted there as of now since the exchanges have stopped transacting ETC.

And as for the future of ETC, it is all up to the devs and how they change this vulnerability. Only time can tell how ETC will fare in the world of cryptocurrencies.

The post Ethereum Classic [ETC]: A deep-dive into 51% attack leading to the loss of $1.1 million worth ETCs appeared first on AMBCrypto.