Addresses holding Bitcoin that haven’t been active for over six months to almost two and a half years are now moving BTC, the data compiled by analytics firm Flipside Crypto shows. Sixty percent of BTC in circulation right now is held by wallets that have been active in the past month. Bloomberg reports that similar wallet activity led to the wild price swings in the years 2015 and 2017.

BTC price now hovers near the $3600 mark. It is believed that about 1,000 addresses hold 85% of all existing Bitcoins. There are some behemoths out there, addresses that might hold millions of dollars worth of Bitcoin. These are called whales, many of which have remained quite inactive. However, the waking of these dormant whales might move prices either way, by either instigating fear or might inspire hope and belief in investors, depending on whether the whales buy or sell.

“It’s definitely a big shift. There’s more potential than usual for price swings.” He also added that there is 40% more active BTC now that in the summer of 2017. 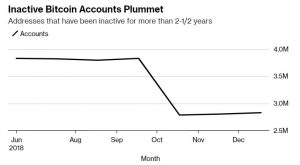 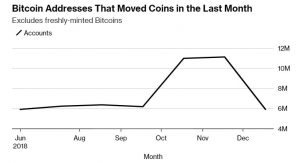 “We’ve definitely seen that many long-time holders of Bitcoin are becoming active.”

The number of inactive accounts has halved, and there was a sudden surge in the number of accounts that participated in BTC transactions. While this might be similar to 2017, as pointed out by Stone, there is nothing to suggest that this time, too, BTC prices will be positively impacted.

It all hinges on whether the holders buy or sell, and how the community and Bitcoin investors react to market activity. Whales selling BTC might be catastrophic, whereas whales buying could drive demand, and prices, upward.