BitMEX, the Hong-Kong based cryptocurrency trading platform holds so many Bitcoins in their Insurance Fund, that they can potentially initiate several 51 percent attacks against many top coins in the market at present.

At press time, BitMEX’s insurance fund holds 21,366.4 Bitcoins which will equal to $76.3 million. Some Twitter users compared the presence of the fund and the attack it could set-off to the Majoras’ Mask in the game The Legend of Zelda as, “knowing the moon is going to destroy you but it’s a long time away so, “eh”.”

Several sharp-eyed users picked up this development in mid-December when the apex of the bearish market had subsided but the market was still in decline.

BitMEX earlier stated, as 2018 began, that the trading platform holds only 2720 BTC [$75.9 million], since then the amount of BTC held in the fund has shot up by almost 8 times since the January 1st, 2018 numbers were released.

Zack Voell, a producer at the popular cryptocurrency podcast “The Coin Pod” explained the BTC holding of BitMEX on January 22, 2019, Twitter thread. Voell kept a track of BitMEX’s BTC held since early 2016.

Within a period of one year, from January 2016 to January 2017, BitMEX added 162 Bitcoins to their fund, the following year, the amount held would rise up by over 1,500 percent to reach 2,720 BTC. Furthermore, in one year, the coin’s Bitcoins held increased to 20,776 as the cryptocurrency prices kept falling through the year. 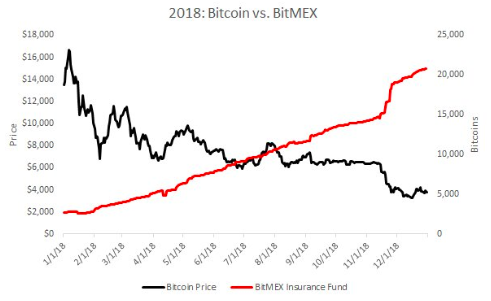 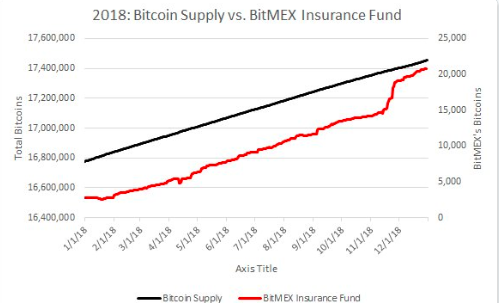 Voell further portrayed that the amount of Bitcoin’s held in the trading platform’s insurance fund increased as more and more of the top cryptocurrency was supplied into the collective currency market.

He further went on to compare the insurance fund, with its 21,366 BTC held to:

Some Twitter users called this out as a “conspiracy,” but Vowell reaffirmed that this information was based on publicly available data which can be easily availed.

“So, by 2022, all bitcoin in the world except a fraction will be locked up in BitMEX’s insurance fund. With that much BTC off the market, the price per BTC won’t be limited to $1m, but rather $1tn. This is actually good for bitcoin.”

An analysis conducted by Crypto51, on the cost of Proof-of-Work 51 percent attack revealed that most virtual currency blockchains could be attacked by relatively small holdings. A 1-hour attack on Litecoin [LTC], for example, would come at a cost of about $20,000, attacks on smaller coins like Bytecoin [BCN] would cost $139 and Ethereum Classic [ETC] would be under $4,000.

Given its current holdings, BitMEX could run a 51 percent attack on top coins like Bitcoin Cash [BCH], Monero [XMR], Dash [DASH] among others for more than a year.

There’s no doubt that BitMEX has fared better than most cryptocurrency companies despite the ‘Crypto-Winter,’ moving into their new office in August 2018, which is also the most expensive office building in all of Hong-Kong.

The post BitMEX: Several Altcoins could be subject to a 51 percent attack from BitMEX’s insurance fund appeared first on AMBCrypto.