Bitcoin Cash [BCH] proponent, Jonathan Silverblood, has announced a new identification system that will enable a custom human-readable alias for payment information. Jonathan, who developed the system, has launched a beta version of Cashaccount.info in order to test its functionality and receive feedback. On Bitcoin Genesis block’s tenth anniversary, January 3, all the beta account names will be invalid when the system finalizes, reported Bitcoin news.

The proponents of BCH can now experiment with the new BCH-powered alias-address system called Cashaccount.info. Previously, Silverblood’s BCH name system, called Cash-ID, was reported to have allowed human-readable account name tied to the keys of a BCH address. According to the publication, the protocol is open source and uses an OP_Return transaction when the name is broadcast and approved on the BCH network.

The details about the naming process and how it functions can be found on Gitlab along with Silverblood’s Cash Accounts Code and specifications. Silverblood explains the reason behind his motivation behind creating Cash Accounts on Gitlab. He said:

“The Bitcoin address system based on hashing data creates complex and difficult to share identifiers. While these identifiers have proper checksums and misspellings are rare, they are still very cumbersome to transfer over the telephone, in a regular chat or similar — Many attempts have been made to obfuscate the addresses by transferring them as QR codes or NFC tags, but the need for a human-accessible format remains.”

On the home page, it reads:

“Bitcoin Cash needs an alias/address system that is designed to meet the expectations of normal users. Cash Accounts allows for human readable account names that are easy to share in conversation.” 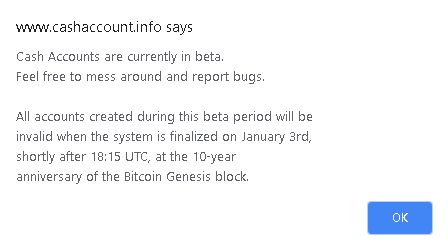 The Cash Account would be even more efficient once more users register for usernames or aliases along with few infrastructural changes. The Cashaccount.info website displays all the Bitcoin Cash supporting wallets Silverblood has reached out for client compatibility.