In the face of a continuing economic crisis, many in Venezuela have, for some time, looked for alternative assets, far apart from fiat currency. Bitcoin has for some time been such a refuge and it would seem that with new Interim President Juan Guaido taking charge of the affairs of the country, use of the cryptocurrency is only going to rise further.

Bitcoin has always been treated by Venezuelans as something like a safe haven asset, a digital asset that is untouched by government interference, devaluation or the risk of hyperinflation. And although cryptocurrencies themselves aren’t immune to hyperinflation, many Venezuelans believe they have more to offer when compared to the state of their national currency, Bolivar. The rise of Juan Guaido could be a boon in this regard as the new Interim President has for long been a proponent of Bitcoin and cryptocurrencies. In fact, he even tweeted out in support of a Bitcoin exchange that had opened in the country way back in 2014. 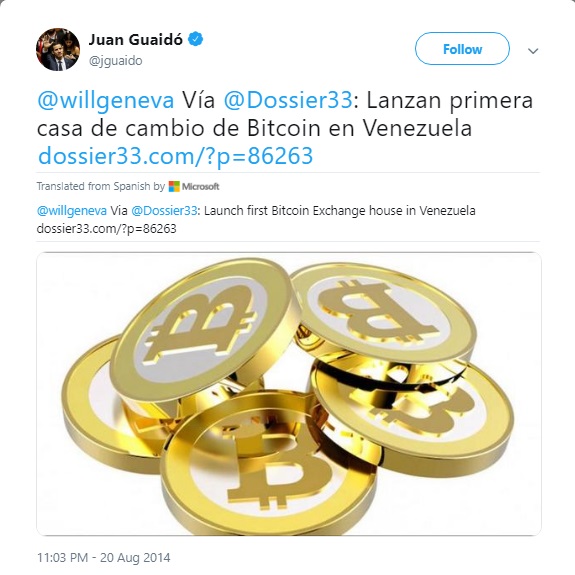 It’s not just Guaido who is a fan of Bitcoin and cryptocurrencies, however. In fact, President Nicolas Maduro has introduced Petro, a cryptocurrency native to the country back in February 2018 and one which would be backed by the country’s mineral and oil reserves. However, it was panned by everyone, from economists to his own people, with the then-rival Juan Guaido even saying that “Petro is just another way for Maduro to scam his own people.”  More recently, Petro was even hiked up to the value of 36,000 sovereign bolivars.

Such conditions, made worse by United States sanctions on the Latin American country have encouraged the growing use of cryptocurrencies across the country. In fact, the first Bitcoin ATM will be installed by the ATM manufacturer, Cryptobuyer in the first week of February in Caracas and is expected to serve thousands of Venezuelan citizens.

Although signs for the cryptocurrency market in Venezuela are positive, a lot of it still depends on the political climate of the country. Cryptocurrency trading has been legal for quite a while now, however, Bitcoin and it’s like will receive a good boost if Guaido remains in power. The chances of that happening if Mathuro comes to power are the same as well however, there is also the possibility that he may disallow trading of any cryptocurrency except Petro, in an attempt to shore up the government’s cryptocurrency. Either way, the fortunes of the cryptocurrency market and its leaders remain entwined for the near future.