Bitcoin mining has faced a lot of pushback as many miners decided to quit mining due to the collapse of BTC prices below the break-even point.

Bitmain, one of the largest Bitcoin mining company in the world had a huge dominance over the Bitcoin market for the past few years. Its hold on Bitcoin mining has since reduced as they have been shutting down their mining farms and laying off employees non-stop.

A recent report by Diar further substantiates this by providing proof that Bitcoin mining pool dominance has dwindled and has shifted towards unknown miners.

“Unkown miners closed December having solved a whopping 22% of the total blocks up from 6% at the start of last year. The Bitcoin network is currently less likely to experience an attack given the fact the BTC.com controlled pools have lost dominance over the network.” 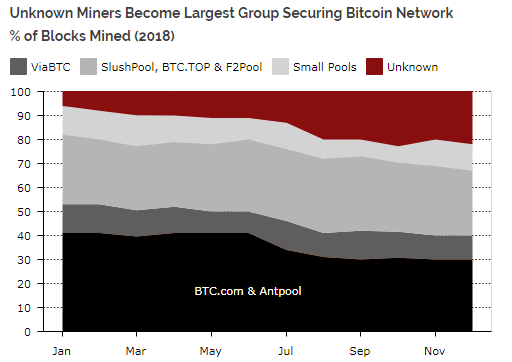 The above chart shows how the Bitmain owned pools, BTC.com and Antpool’s hold on the mining power has reduced as 2018 came to an end. Relatively, it can be seen that unknown miners are stepping into the ‘Bitcoin mining game’ as Bitmain’s power over the mining wanes.

In the whole of 2018, the Bitcoin mining revenues surpassed $5.8 billion, but the surprising fact is that in January 2018, Bitcoin miners earned a whopping $12 billion, but that reward reduced by 83% as of December 2018. The miner rewards, in total reduced to $210 million.

“Efforts of small miners turned sour in September 2018 as record hash power made profitability near non-existent with Bitcoin’s falling price.”

It clearly mentions that the mining power has shifted from Bitmain and into the hands of unknown miners. It also recently abandoned its Amsterdam operation. Moreover, it also shut down the Texas mining farm and it is rumored that Bitmain has lost over $700 million in Q4 of 2018.

Furthermore, Jihan Wu and Micree Zhan have stepped down from their position as CEOs of Bitmain. This news has also poured cold water on their plans to go public as they’ve failed to convince the Hong Kong regulators to approve its IPO.