At a time when there remains skepticism about the safety and stability of the cryptocurrency market, a Google Trends chart has caused quite a stir with many in the crypto community. This chart, going around on Reddit, suggests that more and more people in some countries are now interested in buying Bitcoin [BTC] over the US Dollar. The US Dollar, the world’s foremost reserve currency, is set to be replaced by Bitcoin, this chart further implies.

The basic premise of the chart suggests that since Google users have searched the term ‘buy Bitcoin’ more than ‘Buy dollar,’ However, on closer inspection, it would seem that the Google Trends graph is at best, wrong and at worse, misleading. The graph, that has already incited quite a reaction with the online community, has flaws that challenge the core of the graph’s premise and conclusions. 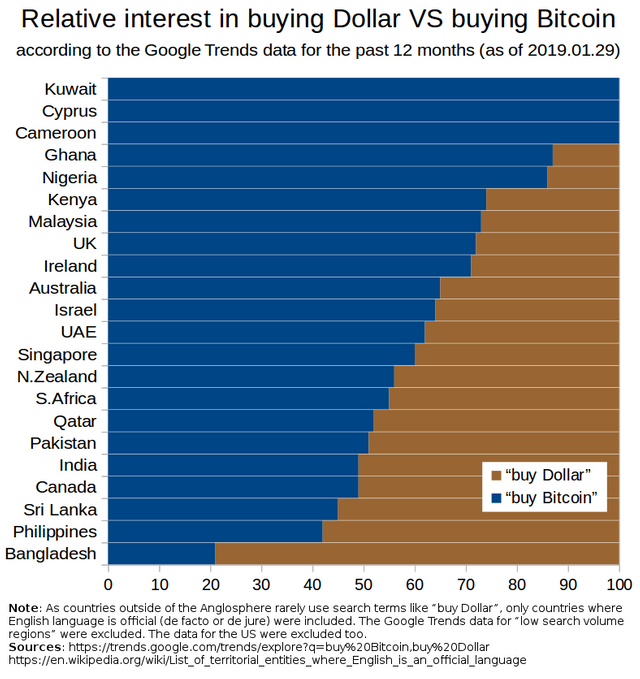 For starters, Google Trends is not a good index to gauge any prospective interest the US Dollar or Bitcoin may have in any country. It doesn’t have any scientific basis as often, searches are an indication of curiosity, rather than genuine interest in buying or investing in any currency, according to Redditors.

According to a couple of Redditors, what would count as a better measure of whether there is a genuine interest in currencies such as the US Dollar and Bitcoin will be the trading volume of each against the local currency of any country. For instance, if one were to gauge prospective interest in India, the volumes for the trading pair INR/USD and INR/BTC would have to be considered. Not to mention, the chart suggests people search for ‘Dollar’ and not ‘US Dollar’ which doesn’t make sense as countries such as Canada have their own Dollar.

Secondly, there isn’t a set pattern to the countries listed in the said graph. The graph does state that it is a list of countries where English is an official language but each country on the list differs from each other with respect to other variables. While some like the Philippines and Singapore are incredibly cryptocurrency friendly, others like India and Kuwait are not. Each of these countries varies from each other in terms of the prevailing cryptocurrency framework, making it illogical for them to be compiled on the same list.

As expected, many in the Reddit community have taken apart the report, with many suggesting that such a flawed report feeds the argument many in the general public and media have about the Bitcoin community. It is thus unlikely that ‘reports’ such as this will help bring Jack Dorsey’s ‘Cryptocurrencies will eclipse all other currencies in 10 years’ prediction to fruition.