Yesterday, January 3, 2019, the crypto space celebrated the 10-year anniversary of Bitcoin [BTC], the largest cryptocurrency by market cap. On that day, the creator of the cryptocurrency, Satoshi Nakamoto mined the first block on the chain aka the genesis block.

The message on the genesis block continues to serve as a reminder why the institutions need to be stripped out of their power. The content on the first block read, “The Times 03/Jan/2009 Chancellor on brink of second bailout for banks”, the front-page headline of The Time on January 3, 2009.

In order to commemorate this event, BitMEX – a Bitcoin Mercantile Exchange, published a segment of an article titled, ‘Would the mass adoption of Bitcoin upturn the whole financial system?’. Along with this, BitMEX also conveyed their gratitude to Satoshi Nakamoto by publicizing it on ‘The Times’. The message read: 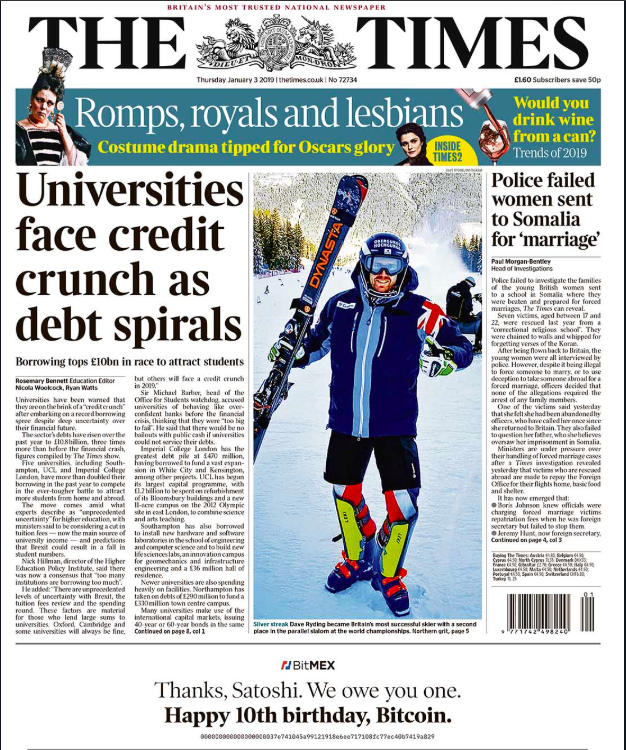 BitMEX’s message to Satoshi Nakamoto on The Times | Source: BitMEX

The key advantages of physical cash include zero transaction fees, 24*7 payments, instant payments, can effectively be hidden by the authorities and is difficult to confiscate, and highly anonymous. It states:

“Bitcoin aims to replicate some of the properties of physical cash, but in an electronic form, an “electronic cash system”. Before Bitcoin, people had to make a binary choice, between physical cash or using a bank deposit. For the first time ever, in 2009, Bitcoin provided the ability to use a bearer type asset, electronically.”

Because of this, Bitcoin can be considered as the new hybrid form of money, sharing advantages of both physical cash and bank deposits. Additionally, the report states that the currency provides a “middle ground option” because it is positioned in a way that it can have “a subset of the features of each”, as the downside of the coin is that it does not have all the advantages of neither electronic money nor physical cash. It stated:

“For example, Bitcoin may never have the throughput of traditional electronic payment systems or the ability to use without electricity such as with physical cash. Although as technology improves, Bitcoin may slowly develop more strengths and gradually improve its capabilities, to narrow the gap.”

The post Bitcoin [BTC] aims to replicate some properties of physical cash but in electronic form: BitMEX Research appeared first on AMBCrypto.