Cryptocurrency exchanges are often referred to as the gateway into the space as it is noted to be key contributors to Bitcoin [BTC] and other cryptocurrencies’ adoption. Exchanges are also known to play a vital role in determining the price of cryptocurrencies and their position in the market.

These reasons, along with several other, have led to exchanges gaining the attention of the regulatory bodies across the globe, with several countries laying down strict rules and regulations. Despite this, there are only a handful of exchanges that have managed to maintain market integrity and gain the trust of their customers. This is because a majority of the existent exchanges either do not have the required security measure or are involved in some sort of malpractice.

This is taking into consideration that a recent report suggested that over 80% of the top 25 BTC pairs on CoinMarketCap is wash traded. Wash Trading refers to a kind of market manipulation wherein an investor continuously sells and buys the same cryptocurrency with an intention to false trade activity on the exchange.

To add on, there are exchanges that are also involved in another form of market manipulation known as Painting the Tape, wherein the exchanges attempt to influence the price of a cryptocurrency by trading amongst themselves. This manipulation tends to the increase in both the closing price of the cryptocurrency and its trading volume. 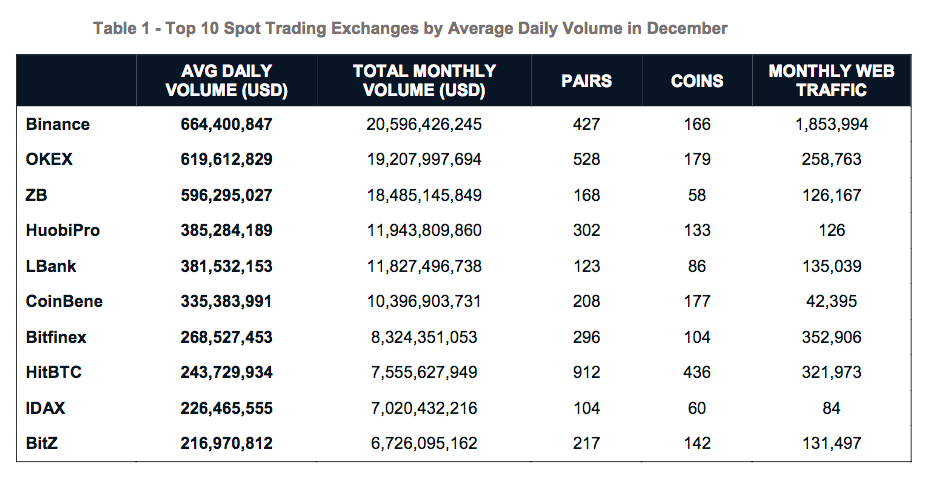 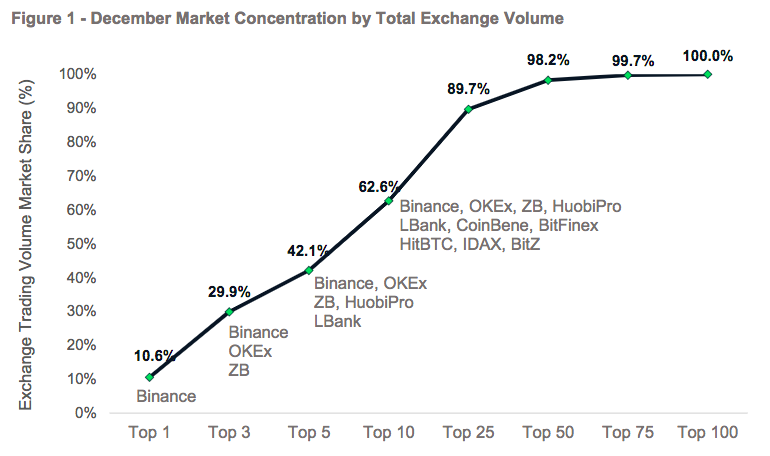 Interestingly, the report also reveals that Maltese-registered exchanges have the highest trading volume and is closely followed by exchanges that are legally registered in Hong Kong and Samoa. The reason behind Malta leading the suit could be because of its cryptocurrency-friendly environment. The country has earned the name of ‘blockchain island’ because of its revolutionary regulations, attracting exchanges such as Binance into setting up their operations on the island.

For the month of December, Maltese exchanges traded around the $40 billion mark, whereas Hong Kong exchanges turned in over $32.5 billion trades and Samoa – over $23.6 billion. Despite taking the top position, Maltese-based exchanges trading volume has seen a significant slump of over 9%, in comparison to November 2018’s $44 billion trading volume. This stands contradictory to exchanges registered in Hong Kong and Samoa as they have seen a rise of 2% and 3% respectively. 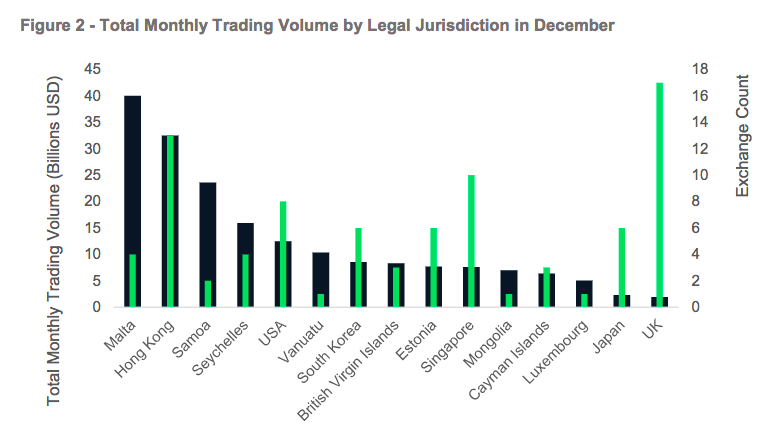 The data aggregated by CryptoCompare also shows that exchanges with Trans-fee mining are slowly gaining traction in the cryptocurrency space. The business model, which became popular because of FCoin, now accounts to over 12% of the total exchange volume, i.e., over $23.2 billion. Additionally, this has seen a rise of over 12% in comparison to November’s $20.3 billion.

Trans-fee mining started to bloom in the cryptocurrency market in 2018. The business model is well-known for being adopted by exchanges such as FCoin and Bitforex to stand out from the leading exchanges. Additionally, this model has been criticized by several influencers in the space including Changpeng Zhao, co-founder of Binance, whereas some have declared it to be Ponzi scheme.

Trans-fee mining is a reward model, wherein traders are 100% compensated with the exchange’s native currency for the transaction fees paid. This model aims at increasing the trading volume of the exchange by reward traders to join and allowing users to trade for basically zero-cost.

The report, most importantly, shows the growth of Bitcoin Futures Trading in BitMEX against Bitcoin Futures Trading in traditional exchanges such as CME and CBOE. The report states that USD value of BitMEX XBTUSD perpetual futures volume has increased by 17.7%, whereas XBTUSD futures on traditional markets took the downward trend in comparison to November 2017. CME Bitcoin futures trading has slumped by over 45.5% and CBOE Bitcoin futures trading has seen a massive drop of over 48% since November. 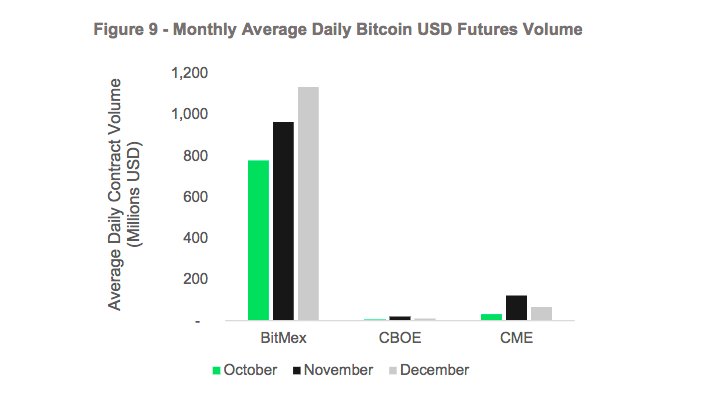 Moreover, exchanges that have implemented either partial or mandatory Know-your-Customer record for over 77% of the total monthly spot trading volume, indicating two possibilities for the rise. First, regulation-compliant exchanges are more favoured by traders and investors in the space, taking several factors into account including the hacks and scams.

Second, the regulatory clampdown on cryptocurrency exchanges has increased over the period of time. This includes exchanges such as ShapeShift, which was forced to implement mandatory KYC/ AML process for all the users of the platform. 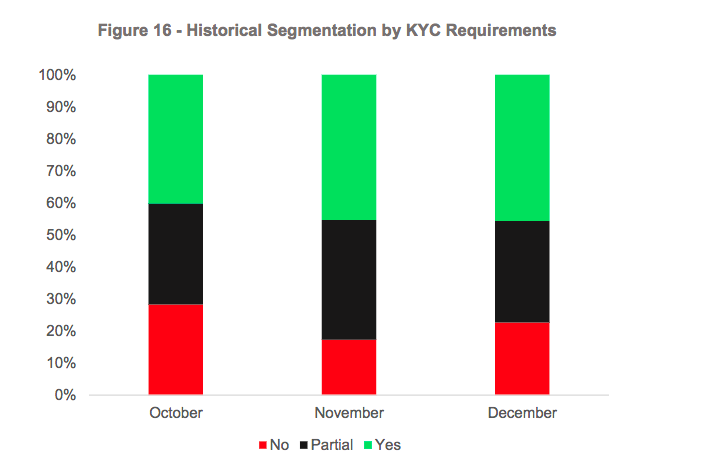 The report also shows trading data based on stable coins, especially Tether [USDT]. Tether [USDT] has been under the radar of the cryptocurrency market since the beginning of 2018. The coin has been under scrutiny for manipulation the price of Bitcoin [BCT] and claims that it does not have the USD backing it claims to have.

Nonetheless, the stable coin that was ruling alongside Bitcoin for the longest seems to be losing its position as other stable coins have hoped on to the bandwagon. This includes coins such as Paxos Standard [PAX], Gemini Dollar [GUSD], and Circle Coin [USCD].

For December, USDT trading pairs demonstrated the largest market for stable coins, whereas Paxos Standard [PAX] held the spot for the majority of the trading volume, with 75% of the total monthly volume. Additionally, USDT trading into PAX has seen a massive increase of 70% in comparison to the previous month. 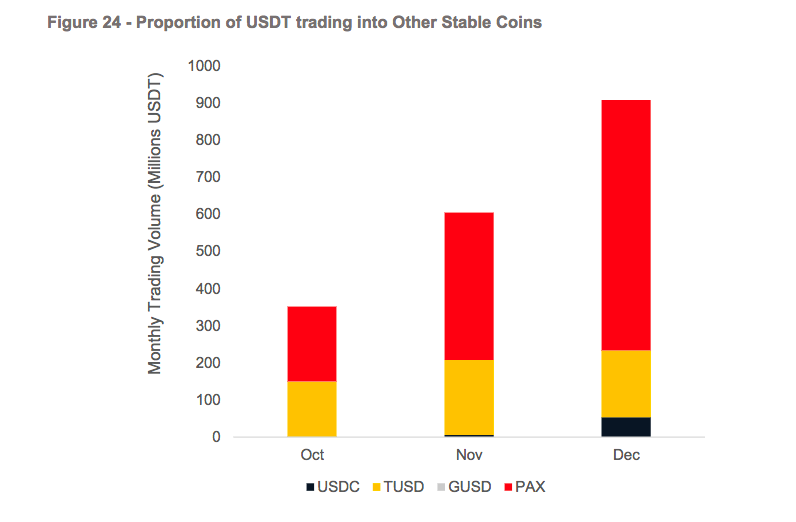 Proportion of USDT trading into Other Stable Coins | Source: CryptoCompare