A few prominent members of the XRP community took a hit at BitMEX Research for a research paper that it wrote earlier this year. Due to the paper put out by BitMEX researchers, David Schwartz had gotten into an argument with BitMEX over a few errors included in the research. Here, BitMEX argued that Bitcoin [BTC]’s network is more resilient than that of XRP as it uses proof-of-work [PoW]. 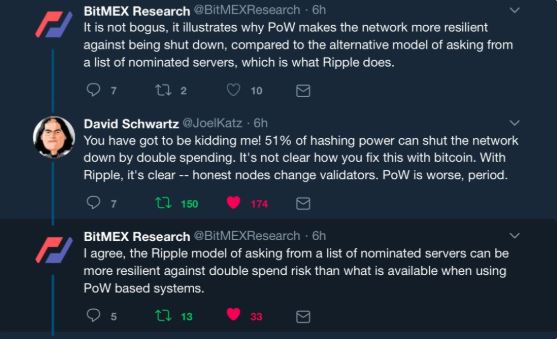 After almost a year, the post caught attention again, from ecent and Tiffany Hayden, two significant members of the XRP community. According to Hayden, BitMEX Research did not correct their ‘error-filled research’ in time and needs to be addressed for the same.

Furthermore, she expressed that it is tiring to witness incorrect information in the cryptocurrency space where the spread of misinformation has become common.

On the hand, ecent stated that the since their online discussion with the CTO of Ripple, BitMEX changes its tone in what they were saying earlier about the XRP ledger. The comment read:

“The speed with which BitMex “Research” changed its tone is comical. Did David just display a jedi mind trick in real life? Star Wars is real and we have found Yoda!!! “

“Please point to the errors and we will fix it ASAP”

To this, Hayden also replied and acknowledged:

“Have you scrolled up at all?”

In a recent interview with Internet History Podcast, Schwartz spoke about the PoW protocol used in Bitcoin and mentioned it as an “adversarial system”. On the other hand, he revealed that the idea behind the creation of the XRP ledger was to leave the PoW mechanism behind.

According to him, the system that BTC runs on creates competition among the miners, giving birth to conflict of interests. In XRP, the community works together for the progress of the ecosystem.

The post XRP community members take a hit at BitMEX over misinformation in report appeared first on AMBCrypto.