As the year comes closer to an end, the markets that were rallying have settled down, but Christmas is yet to come, and Changpeng Zhao [CZ], the CEO of Binance, might just be the Santa the XRP community is looking for as he teased a possibility of XRP being a base pair on Binance.

The “XRP base pair” movement dates back to a few months when a crypto-influencer, C3 Nik, tweeted, asking CZ to add XRP as a base pair on Binance. 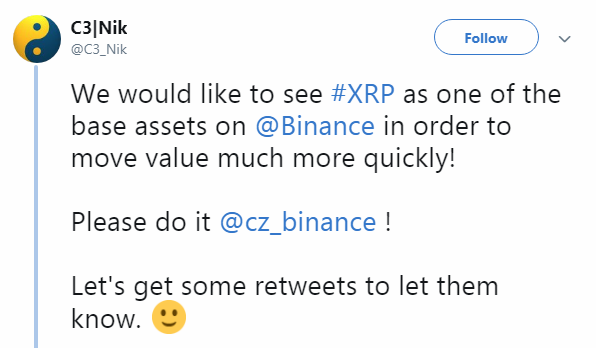 This movement gained a lot of traction from the XRP community as the tweet gained over 191,000 impressions, with almost 2,000 retweets.

Although CZ didn’t reply or respond to the tweet, users and the community didn’t give up on the movement. A Twitter user, The Modern Investor, commented on one of CZ’s tweets, saying:

“CZ, the amount of money Binance will make with XRP as a base pair will be staggering. The hype is real because the technology is sound. And I mean…come on, you’ve listed the 1st & 3rd currency as base pairs, why not the 2nd largest coin on the market?”

” think CZ is playing coy…..he knows its in the works”

The efforts were thought to be lost, until a user iZombieXRP’s comment on CZ’s recent tweet asking for a Camaro or XRP as a base pair. He tweeted:

“there’s 2 choice here but u need to pick one

People in the XRP community are now enthralled with this reply and are waiting for the news to be officially announced. However, some people are looking at CZ’s comment in a negative way.

“careful what you wish for” generally implies that there are unwanted consequences if you get what you desire. Such a strange response and I have no idea what to make of it. Thoughts? #xrpcommunity $xrp.”

The post XRP as a base pair on Binance might be a Christmas gift from CZ to the XRP community appeared first on AMBCrypto.